Women In Travel With Angella Bennett 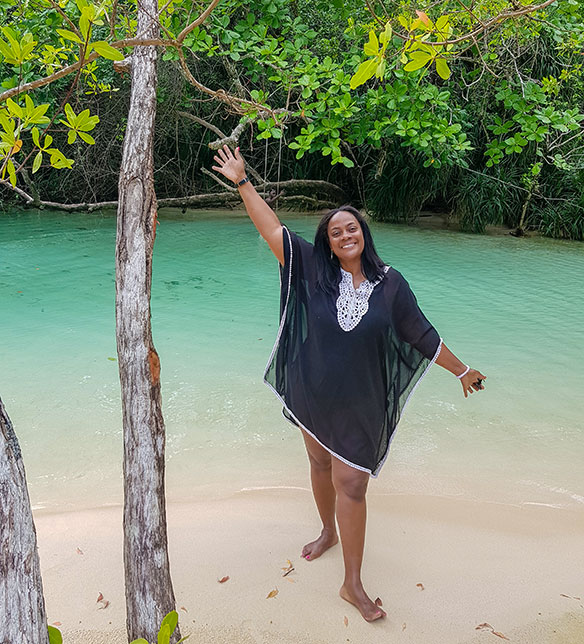 Before getting into the travel industry, Angella Bennett was eyeing a slightly furrier field.

“It’s funny, I wanted to be a vet. This was my passion back in time, I wanted to be a veterinarian. But I had gone to school outside of Montego Bay, which was then more the tourism capital. When I returned home there was only [jobs in] hotels or banking, and so I decided my personality was more into hotels and that’s how I started. I fell in love with the industry ever since and I never looked back. I’m still a big lover of animals, but tourism has taken that place of my first love.”

Although Bennett was only recently appointed to the role of regional director of tourism, Canada for the Jamaica Tourist Board, she brings over 25 years of experience in hospitality sales and marketing to the role. Reflecting on the whirlwind past few months, the self-professed lover of jerk chicken and zip-lining said she received the good word that she officially landed the job in December, started the application process for a work permit in January, and was in Canada by April.

“The pressure is on because I’ve literally hit the ground running. I arrived here on the 6th of April, just a few weeks, so the learning curve has been very short,” she says. “I’m very excited because it’s a known area for me. Canada has been a comfort zone with the relationships I’ve built over the years from my previous positions, and so, it’s exciting because I get to work even closer with the partners of Canada. It’s for us the second-largest producer of travel to Jamaica, and I want to see how I can push it to its limits and really to see what Canada can do in performance.”

A little bit of history
After getting her start in the industry at Half Moon, a luxury resort in Jamaica, Bennett went on to work for Caribic Vacations Limited, as the director of tour operator management, overseeing product development, quality control and accounting management for several major European tour operators for 10 years. To balance her knowledge across the US-side of the industry, she then took on a brief role with El Greco Resort before joining the ranks at RIU Hotels & Resorts for more than a decade. Most recently, she launched Meliá Braco Village Jamaica, which notably helped her become more familiar with the major industry players in Canada.

“I joined RIU Hotels, which balanced my portfolio in having that complete complement of the different markets, US, Canada, Latin America and my homeland Jamaica, so all of those have led to where I am today,” she says. “Meliá Braco was my last hotel in Jamaica and that completed my relationship building with all the players in Canada because RIU Hotels work exclusively with one of the partners here for many years before they changed, so when I joined Meliá Braco they have an open working relationship with all the partners. So, I was able to, in the last two and a half years, to solidify those relationships with other key players in Canada that I needed to know.” 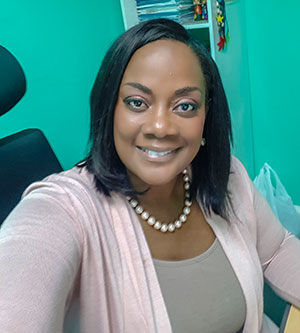 As for the new job, she’s focused on growing the numbers from Canada, increasing airlift capacity to the destination and ramping up year-round interest in Jamaica.

“The future for me in Canada is breaking the glass ceiling on the growth of Canada, and it’s going to be an exciting time because my country is evolving in tourism, it’s leading the Caribbean in terms of security of investment, in hotel brands that are now coming into Jamaica,” she says. “The growth of tourism and room stock in the next five years will evolve into really, really significant numbers, at least 15,000-20,000 new rooms should be coming into Jamaica. So, our work is never-ending, and we will have a future that is just packed with excitement and to capture that sort of investment and to deliver on it with the numbers to Jamaica will be phenomenal.”

Another priority is on ensuring travel agents and travel partners are fully engaged with selling Jamaica and know about the latest offerings, including luxury options in the destination.

“It’s about selling the new Jamaica because we’ve had a lot of product updates, we’ve had new hotel branding on the destination, and therefore the education process of having the travel agents more engaged with us, the experience of destination, Jamaica has to be one of the forefront priorities of my list, as well,” she adds.

In terms of challenges on the road ahead, she says the biggest difficulty is in the perception of the destination compared to its perceived competitors, Mexico and the Dominican Republic.

“These are large volume inventory destinations versus Jamaica, so I will always have to ensure that we engage, we capture, we solidify all our bookings in advance when we’re working against those bigger players,” she says. “But again, this comes down to how we engage the travel partners, the sellers of travel, in getting our numbers to Jamaica.”

Milestone moments
Looking back on the span of her career to date, Bennett counts being one of the first Jamaicans to head a five-hotel chain in the country as a major highlight. As director of sales for RIU Hotels & Resorts, she oversaw sales, and revenue management activities for 2,500 rooms across five resorts in Jamaica.

“This was a great accomplishment for me and leading that direction for the past 13 years, opening five of their six properties, this was a very interesting experience for me because they gave you the autonomy to really drive the sales and this has been a successful journey for me,” she says.

On a personal note, she counts raising her two children, Caterina and Torrence, to see the world as she does as another highlight. 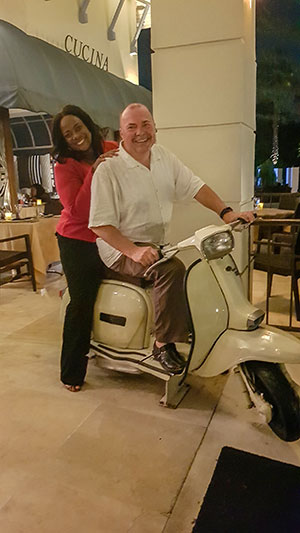 “Giving them that international experience, my daughter studied culinary arts in Switzerland and is now back in Jamaica hoping to put that to good use, and my son is also studying in the US, and he wants to go into robotics, so on a personal level these are things that I hold very dear to my heart and ensuring that they have a broad view of the world and appreciation for different cultures and different people,” she says.

Finally, on a humanitarian side, she had the opportunity to help found a foundation for children with disabilities, which was funded by RIU Hotels & Resorts in Jamaica.

“This is the Negril Paediatric Orthotic Clinic, which is still in existence, and we have the support of orthotic specialists from Canada and from the US that come on a scheduled basis to Jamaica to give treatments to children with deformity of the legs,” she says. “I really found that a worthy cause to put a lot of support behind and making sure that the children got the treatment they needed and the treatments that are not necessarily readily available in Jamaica.”

The path to success
When it comes down to it, Bennett says finding success in the industry is all about building relationships.

“These two ministers have really been a driving force in the evolution of tourism. Ed Bartlett has always been a visionary. He has created something called the tourism resilience centre that does research on threats to tourism and how do we stay ahead of that. I think those are things that are truly inspiring for future growth in tourism,” she says.

“Aloun, I’ve admired her a lot in the past, she was the former minister of tourism, and she has always been an open book. For her, it’s all about building relationships.”

It comes full circle with her final mentor, Myrtle Dwyer, the former director of sales for Half Moon, who now runs her own organization called Glamour Luxury Destination Concierge.

“Those have been people that have inspired my growth path and just have always been role models to follow,” she says.

As for both the most interesting and the most challenging aspects of being in the field, she says it’s the always changing nature of the job.

“It’s never two years the same, it’s never two days the same, it’s the ever-changing pace of the market and the challenges, what affects it globally that is sometimes out of your control, a hurricane, natural things and how resilient we are in coming back from that, so it’s never a job that you can say this year is going to be the same or different, it’s always changing,” she says.

And while she’s new to Canada, she says it was always her favourite vacation spot outside of her homeland.

“It’s always been Canada. I vacationed here a lot in Muskoka,” she says. “I have very close friends that have a cottage there, and for many years I have vacationed in Canada with my family.”

Q and A with Angella Bennett

Get to know the new face of the JTB in Canada

What would you tell someone who is thinking of getting into the travel industry?
If you want a whirlwind, exciting, rare career with ever-changing challenges and just stretching yourself to the limits, tourism is the job for you.

What advice would you give your former self?
I’d tell my former self, just trust your instincts more and take more risks.

What’s something not a lot of people know about you?
I’m sometimes an introvert. On the private side, I’m extremely a private person. 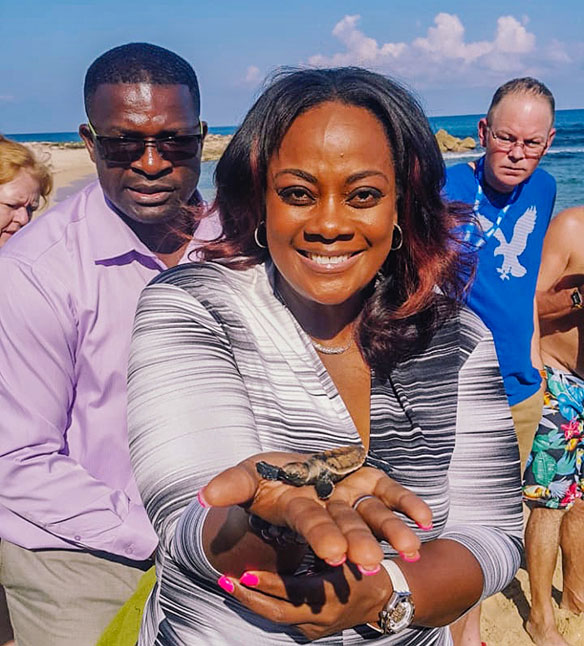