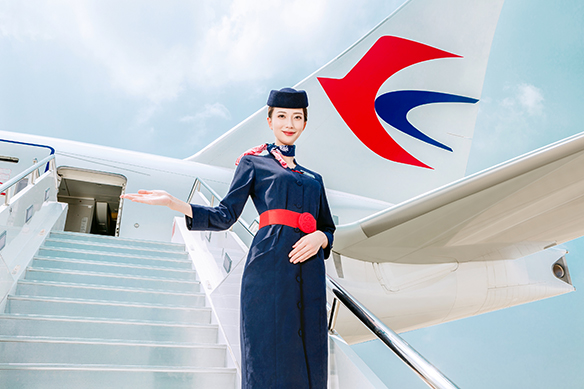 China Eastern Airlines wants to build the same kind of reputation among the general public in the Toronto area as it has among expatriate Chinese living in the Ontario capital.
The Shanghai-based airline has daily Toronto-Shanghai service, offering passengers a choice of First, Business and Economy Class service on the B777-300s it uses on the route.
China Eastern Airlines – one of the three largest airlines in China – flies throughout the Asian country and has many destinations elsewhere in Asia as well, although staff concede many in this country aren’t familiar with what it offers.
“Currently, our main passengers are from China or local Chinese but we want more locals. We want people to know our airline,” says Julie Zhu of the carrier’s Toronto office.
SkyTeam member China Eastern Airlines has a “strong working relationship” with Delta Airlines, reports Liv Yao, also of the Toronto office and has also invested in Air France/KLM.
Crew members on the Toronto route speak Mandarin and English, and possibly other languages.
Passengers can choose between Western and Chinese meals.
Free WiFi is available in all three classes found on planes travelling between Toronto and Shanghai.
The airline pays commissions and offers fares that Zhu says are “very competitive.”
Air Canada also offers Toronto-Shanghai service, making that airline a competitor.
However, Zhu says China Eastern Airlines has a number of pluses, among them those who are travelling beyond Shanghai with the airline to other points in China or to other Asian countries China Eastern Airlines serves having their luggage sent straight through to the final destination.
Same-day connections are available from Shanghai, to many other points in its network, and the airline will provide a free night’s hotel stay to those travelling beyond Shanghai if those quick connections aren’t available and the passenger books the hotel stay ahead. Business and First Class passengers leaving from Toronto are also offered airport limousine service, if they live within 50 kms of the city and book ahead.
More information can be found at ca.ceair.com.