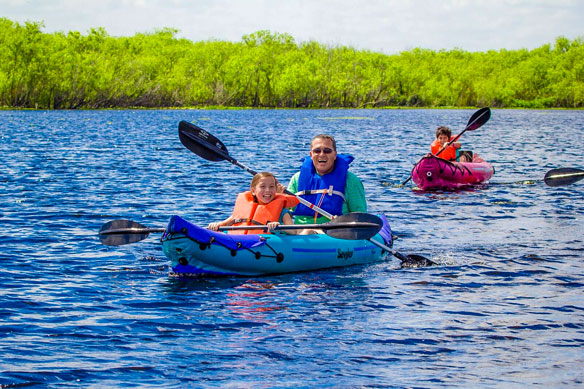 Pictured above: Kayaking is among activities outdoor enthusiasts can enjoy in the Melbourne area.

Orlando Melbourne International Airport – the name of which reflects both its Melbourne base and its proximity to Orlando, with some Orlando theme parks being within an hour of Melbourne – wants to attract more Canadian users and notes that Porter Airlines has seasonal service to it from Toronto, Ottawa and Windsor.

American Airlines and Delta also use the Melbourne airport.

International passengers arriving at Orlando Melbourne International Airport won’t find their arrivals run of the mill, with what are labelled international ambassadors on hand to provide those arriving from outside the United States with fresh orange juice. Children also get a sand pail and shovel, while adults get sunglasses, gifts that reflect a destination that has what Booker calls “72 miles of uninterrupted beach.”

The ambassadors – some of whom are trilingual – receive Disney-style training.

As well, steel drum music announces that baggage conveyors are starting up.

“We recognize that people have other options to fly to Florida, and we want their experience to be memorable, unique and stress-free,” Booker says.

One Orlando Melbourne International Airport runway is only 100 yards from the Atlantic Ocean, with Booker reporting that arriving passengers will actually be able to smell the water body.

Booker says the Melbourne area offers plenty for tourists, including great views of rocket launches from nearby Cape Canaveral. Around 50 launches are planned in 2019. Locals often watch launches from their backyards. “I literally have a rocket scientist next door to me,” Booker says.

Tourists can visit the Kennedy Space Center’s visitor complex, which tells the history of the American space program.

Nature enthusiasts can opt for the likes of moonlight kayaking and paddleboard tours, which may attract curious, but harmless manatees, says Booker, adding that the Melbourne area amounts to the “real Florida” – an area that’s free from the likes of man-made lakes.

Golf is another area activity.

More airport information can be found at MLBair.com.