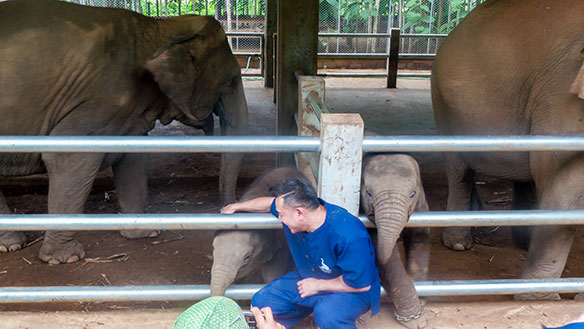 (Photo above: Chad Intrachooto of the Tourism Authority of Thailand met the two newest additions at Baanchang Elephant Park.)

Thailand’s Baanchang Elephant Park is looking a little like a maternity ward these days.
The Chiang Mai-area park is home to around 45 Asian elephants, including two comparative youngsters, with their arrivals a welcome development, as elephants are often slow to reproduce, says the park’s Weerayut Punpu.
The young pachyderms were born this spring – weighing a hefty 80 to 120 kilograms on day one – and for their own safety are kept with their mothers in a facility separate from other elephants.
They’ll likely be united with the rest of their imposing brethren around the age of two.
Those visiting the park are invited to feed elephants, which can weigh up to four tonnes and are seemingly always hungry; ride the creatures “bareback” style on shortish excursions; or even participate in a “daycare” program that can include the likes of bathing an elephant in an on-site water body, feeding them and exercising them as well, with the latter involving leading them on guided walks.
Feeding them includes holding out bananas and sugar cane, both of which elephants love. The elephants – including an amorous one dubbed Casanova by park staff – take the offerings with their trunks and insert them into their mouths.
Elephant parks have come under criticism in recent years, with some tour operators refusing to send clients to parks that offer elephant rides or train the creatures in the likes of “painting” or “playing soccer.” Those tour operators argue that elephants shouldn’t be used for human entertainment.
Baanchang doesn’t feature the likes of elephant soccer contests or elephants running paint brushes over canvases, and Punpu says Baanchang’s elephants are better off than those living in the wild, adding they continuously receive “very good, nutritious food” and other care.
Thailand is seeing elephant populations fall, as are other countries in which the animals are found. Shrinking habitat is one of the issues blamed for the drop in numbers.
Elephants are an iconic symbol of Thailand, with Thai generals once riding on them as they led troops into battle.
Punpu reports that Baanchang elephants have been rescued from illegal logging camps, where the powerful creatures were used to haul logs and abuse was common.
He says the park is committed to providing a comfortable environment for elephants, noting that it has smudge fires that help keep irritating insects at bay.
Punpu says he hopes Baanchang will eventually have 60 elephants, all of whom will receive a comparatively comfortable life, he promises.
“We’re taking good care of them because they’re a treasure,” he adds.
(www.baanchangelephantpark.com)