Ensemble fast forwards in the Bahamas

On the shoulders of GIANTS 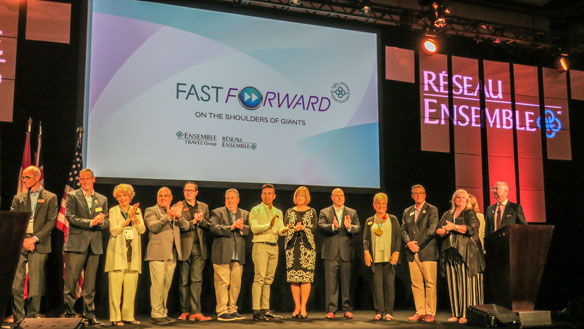 Warren Buckner, the visionary behind GIANTS, had a hunch back in the swinging sixties that it would be a good idea to create an organization to help agents like himself seal the deal.

“You know we didn’t have anything like this,” the veteran travel insider who is revered as the founding father of The Ensemble Travel Group told Canadian Travel Press at this year’s annual international conference which was held late last month in Nassau, Bahamas. 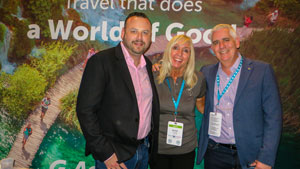 Fifty years ago, the chairman emeritus, Ensemble Travel Group and president of Gayety Travel Service was busy making phone calls, working tirelessly behind the scenes, and forging partnerships – things he said that were non-existent in the industry.

Judging by the nearly 1,000 participants who attended this year’s Ensemble Conference, 50 years is lots to brag about.

Canada’s longest operating travel trade cooperative received a special shout-out during the Fast Forward: On The Shoulders of GIANTS themed conference, as member delegates watched the opening session presentations from the glitzy Andros Ballroom at the Grand Hyatt Baha Mar.

“It was in 1984 when we secured Canada,” Warren later told CTP and added with a full smile, “I was so happy when Canada arrived.” 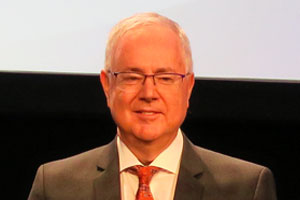 At the opening address, co-president Lindsay Pearlman announced a banner year with the last three years being the best on record for the organization. Co-president Libbie Rice added how the financial success has surpassed all of Ensemble’s expectations and the industry norm. “Our financials have never looked healthier,” she said observing the group’s human resources have never been stronger. “And their sole purpose is to help you succeed. Just look at your own business. If you’re in this room, think about how far you’ve come in your professional journey. More than likely, you didn’t do it in major leaps. You did it in small steps just like GIANTS and Ensemble.” 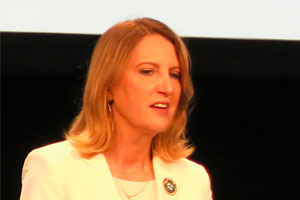 Libbie Rice and Lindsay Pearlman described how personalization, positioning and a call-to-action are driving Ensemble’s latest marketing strategies with new initiatives coming online over the next few months.

The results of market research studies conducted by Ensemble Travel Group have revealed Ensemble’s “new to brand” marketing pilots have out-performed supplier national direct mail campaigns by as much as 3 to 1. “This type of customization is part of our ongoing brand testing to determine what resonates best in the marketplace,” said Rice, co-president. For instance, Ensemble’s marketing committee members can now assist colleagues through a new member-to-member approach in a Peer-Based Mentoring Program suitable to help new member agencies. 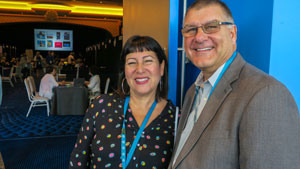 On the technology front, Navigate which is Ensemble’s integrated booking platform will have completed the cruise booking engine part of phase 1 in its roll-out by year end. “The feedback continues to be positive, especially from a time-savings and booking management perspective,” added Rice at the opening session.

In 2016, Ensemble developed Plan 2020 with four pillars, as a guiding light in future planning. One of them is to integrate more data infometrics to better understand consumer behaviour and to foresee trends in products, suppliers, and members. “We’ll know that a destination like Japan is trending higher this year versus last year because we will see it in the bookings across all the segments,” Rice indicated. “It also got easier to detect shifts in booking patterns.” For example, Ensemble booking patterns indicate a longer advanced booking window for river cruising. “This intelligence means we can better manage our supplier contracts and adjust our marketing, so we are connecting the right product at the right time to the right customer.”

A lot of insight 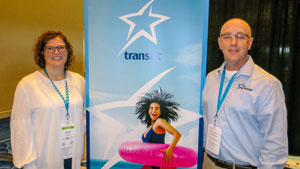 A new customized monthly infometrics report called “Ensemble Insights” is set to launch and is expected to have better interactive analysis on members performance as well as a “next tier” performance report on supplier commission levels. Ensemble reports, the new design will allow members to search by date range, suppliers, product, and locations to enhance data on trending and Ensemble rankings with the preferred suppliers.

Keynote speaker Kindra Hall, a national storytelling champion who is also the president and chief strategy officer of a marketing agency Steller Collective, took the opportunity during a brief power outage in her presentation to relay how good storytelling helps to seal deals in trip bookings. She showcased an online Ebay case study of 200 objects worth $250 total that resulted in $8,000 sales, a 3,100 per-cent increase, based purely on the narratives. “People buy the story on what the thing means to them,” she observed.

During the week, Transat which sponsored a Canadian lunch highlighted how Ensemble remains an elite network that has outperformed other similar organizations for Transat. “Your business mix with us is 23 per-cent Europe,” shared Nicole Bursey, commercial director, Transat Tours Canada, pointing out the company’s other networks are well below 20 per-cent. “Good job Ensemble in recognizing the number of Canadians going to Europe is equal to the number going to the south.”

AmaWaterways picks Rice
In this familiar family atmosphere of Ensemble, the announcement of Libbie Rice as AmaWaterways godmother for the new AmaMora was a fitting tribute during Ensemble’s golden anniversary. “Libbie is an extraordinary travel professional with incredible knowledge and experience, as well as an avid world traveller, which makes her the perfect choice to fill this exciting role,” said Kristin Karst, executive vice president and co-owner of AmaWaterways on the special honour for this new ship, one of three scheduled to launch in 2019.

The trade show saw several exotic partner suppliers interested in the Canadian market. Jim Selkin, director of business development and creative in North America with Trails of IndoChina, a luxury boutique travel company, sees Ensemble as a good consortium to build his Canadian bookings. “In my view, to effectively penetrate the Canadian market, I have been successful in doing that through Ensemble,” he says. Tarek Mousa, founder of Cairo-based Egypt and Beyond Travel has seen a record 40 per-cent sales increase in 2018 from Canadians he attributes to Ensemble.

“The travel advisory is not scaring Canadians. I’m afraid once the advisory is lifted the demand will double,” says Mousa outlining Canadian clients typically spend nine-days in Egypt on a popular Nile River cruise with one of his premium suppliers like Oberoi, Sonesta Cruises or the privately owned eight-cabin ship, Dahabiya Hadeel.

Watch for more from the 2018 Ensemble Conference in upcoming issues.