Home › Digital Post › Escape to the islands of Hawaii with Norwegian

Escape to the islands of Hawaii with Norwegian 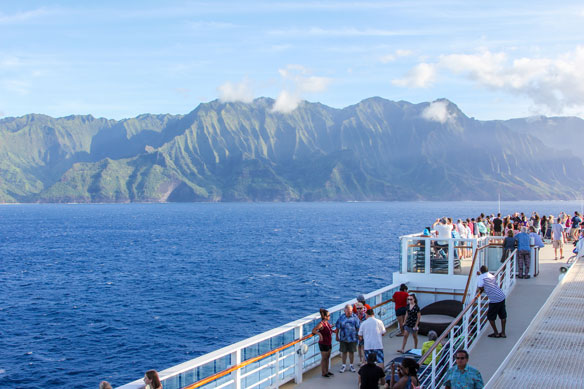 Unique culture, outstanding outdoor adventures and some of the best beaches in the world – just a small sample of what this exotic destination has to offer. Aloha, welcome to Hawaii.

With the fireworks of the Kilauea volcano now a distant memory, tourism officials – and Norwegian Cruise Line (NCL) – are encouraging travellers that may have been scared off by the eruptions to come back and enjoy the aloha spirit. 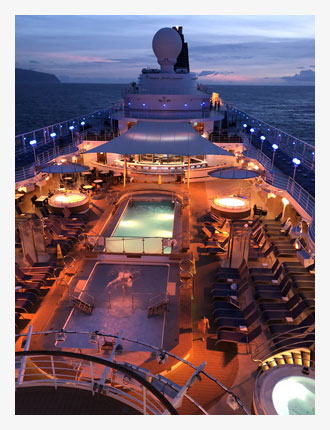 With numbers dipping slightly over the summer months due to the volcano, Hawaiian officials have anted up an additional US$2 million to promote the islands of Hawaii.

NCL earlier joined in the campaign by hosting a week-long industry fam, which included several Canadians and Travel Courier’s Greg Coates, aboard the Hawaii-based Pride of America.

And in a concerted effort to stimulate tourism, NCL, along with the Island of Hawai’i Visitors Bureau, hosted a private event during the trip in Hilo to celebrate the culture, history and people of Hawaii.
The cruise line also announced a new, limited-time free (and reduced) airfare promotion, valid on Pride sailings through Dec. 19, 2020. For example, with the promotion, flights are available from Vancouver for $399. See https://www.ncl.com/ca/en/termsandconditions/promotions#hawaiiFAS for full details. 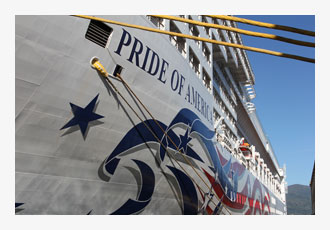 Andy Stuart, president and chief executive officer of Norwegian Cruise Line, Ross Birch, executive director of the Island of Hawai’i Visitors Bureau, and State Representative Richard Onishi addressed those in attendance, each emphasizing the tourism opportunities across the Hawaiian Islands.

Stuart discussed the company’s long-standing support for the destination and its 14 years of offering interisland sailings year-round from Honolulu.

“I always talk about it as being the perfect cruising location. The variety between these four islands (Oahu, Maui, The Big Island and Kauai, featured by NCL) that are so close together is really quite striking,” said Stuart, noting that the itinerary is the most port intensive offered by the cruise line. “We have over a 100 hours in port to really give folks the opportunity to experience this incredible destination.”

He added, “Our Pride of America sailings continue to be one of the most coveted itineraries we offer. We remain dedicated to this captivating destination, which is why we are inspiring travellers with this latest free air promotion. We want to encourage vacationers to take a closer look at Pride of America, Hawaii and all this paradise state has to offer.”

Each year, NCL draws more than 111,000 travellers to Hawaii and adds close to US$436 million to the state’s economy.

“We appreciate the continued commitment of Norwegian Cruise Line to showcase the Island of Hawaii to its guests, especially considering the challenges in travel demand that Kilauea volcano’s latest lava flow created this past summer,” said Birch. “With most of Hawaii Volcanoes National Park having reopened, visitors can now enjoy all that our majestic island has to offer. The air quality is clean and beautiful for all to enjoy, new nature-based experiences are available, and the weather will continue to be warm and welcoming throughout the fall and winter months.”

And what better way to see the Hawaiian islands than by cruise ship? It’s not only convenient, but affordable. It’s like seeing the islands aboard your own floating hotel (with all meals included). As one official noted, “it’s a great way to see the islands, you unpack once, and there are no airports to deal with.”

Cruises on Pride of America are currently open for sale through April 2022. 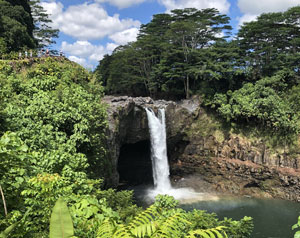 Pride of America’s seven-day interisland itinerary starts and ends in Honolulu, Oahu and includes an overnight in Kahului, Maui; two calls to the Island of Hawaii, including Hilo and Kona; an overnight in Nawiliwili, Kauai, as well as a scenic cruise by Kauai’s famed Napali coastline, a 15-mile stretch of mountains and sea accessible only by air, boat and on foot.

The 2,186-passenger ship itself could be described as “classic” with an old school elegance. It is warm and welcoming, but as an older ship may lack some of the bells and whistles of some of today’s newer ships. Pride underwent a complete refurbishment in 2016.

Amenities aboard Pride of America include 19 dining options, highlighted by several specialty restaurants (such as Cagney’s Steakhouse, the Italian eatery, La Cucina, and Jefferson’s Bistro, featuring French cuisine), 12 bars, lounges, library, games room, and spa, offering more than 50 specialty treatments. Note: There is no casino, as gambling is not allowed in Hawaii.

Helping get guests in the aloha spirit, NCL offers authentic Hawaiian experiences on board, including hula dancing, lei making and talks about the history and lifestyle of Hawaii led by a cultural ambassador.

As with any cruise, pre- and post-cruise tours are available. These include some of Oahu’s top attractions such as Pearl Harbor, the Polynesian Cultural Center and the Kualoa Ranch. Tip: Agents should advise their clients to fly in a day early or fly out a day later to take advantage of all that Oahu has to offer, such as the famous Waikiki Beach.

Along the North Shore of Oahu, guests can explore a variety of attractions from former pineapple plantations and sugar cane fields to well-known surfing beaches, including Waimea Bay, the two-mile-long Sunset Beach, and Banzai Pipeline. Diamond Head, the iconic landmark located on the eastern end of Waikiki, offers impressive views of Honolulu.

Haleakala Crater, a dormant volcano and the highest peak on the island, offers unforgettable sunrise and sunset views. 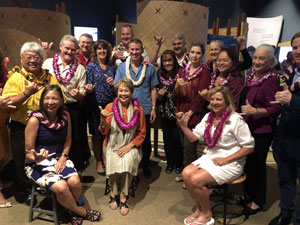 Nawiliwili is a port on the oldest of the Hawaiian Islands, Kauai, known as the Garden Isle for its lush tropical rain forests. It’s also home to the dramatic cliffs and pinnacles of the Napali Coast. Kauai is famed as a popular movie location and has served as a backdrop for such films as Raiders of the Lost Ark, Jurassic Park and King Kong.

Norwegian’s overnight in Nawiliwili even allows guests time to take part in a hike of Waimea Canyon, know as the “Grand Canyon of the Pacific.” Advise your clients to pack their boots, as there are more than 40 miles of hiking trails.

“Hawaii has been recognized as a leading contender for vacationers from Western Canada, but no matter where you reside, this destination has something for everyone.

If your goal is to see Hawaii, one of the easiest and most affordable ways is on Norwegian Cruise Line’s Pride of America. With over 100 hours onshore, this is your floating hotel. 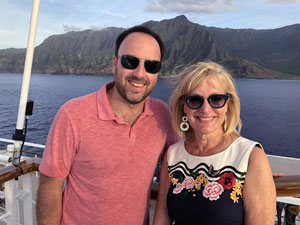 Each island is unique and has much to offer from spectacular scenery, beaches, and for the active crowd, there is hiking, surfing, golfing, and so much more. There is so much to see and do in Hawaii, I would recommend adding days pre or post to your cruise.

Your experience in Oahu, for example, changes within miles. Oahu’s Honolulu is a city on a beach – shopping and restaurants to equal New York’s Fifth Avenue, while Waikiki beach coexists with sun seekers and surfers. And a short drive away is the famous North Shore with critically acclaimed food trucks, beaches, surfing and a cool laid-back atmosphere. Travel east around Diamond Head and you’ll see jaw-dropping scenery at every turn.

If all that isn’t enough, head north and see where Jurassic Park and 50 other movies were made at Kuacoa Ranch. Every island is unique, but one thing is common. The Hawaiian people are welcoming to tourists and amazing hosts.” — Bowman

“Hawaii is a destination full of experiences – it is not a place to sit around and decompress. If you are looking to be active and marvel at your surroundings, Hawaii is a must.

For a group of islands so close in proximity, there is an incredible amount of diversity between them, from the Napali coast of Kauai to the Molikini Crater off the coast of Maui to the endless beaches throughout.

For a first-timer to Hawaii, Pride of America is a great way to experience the islands. The itinerary allows you to experience all the islands and with two overnights, you can truly immerse yourself in Maui and Kauai and have a day each in Hilo and Kona. The specialty restaurants on board the ship have great menus and the food was delicious. The ship is exactly what you want it to be.” — Smith