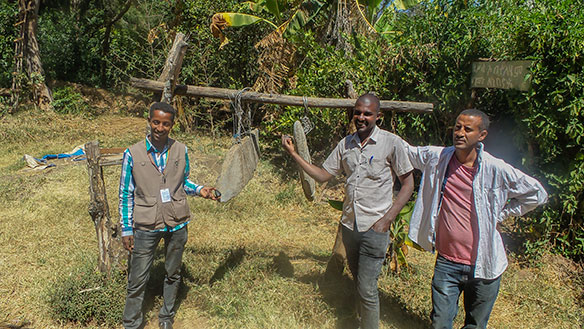 The Lake Tana area of Ethiopia has picture-perfect signs of early Christianity.
The area is home to several religious structures, among them the Ura Kidane Mihret Monastery famed for its interior walls of floor-to-ceiling, Christian images dating back to the religion’s earliest days.
The images adorn a circular interior wall and date back to the 16th century and enabled those who were unable to read to learn about their faith.
Local tourism official Ayinekulu Mulugeta says the circular nature of the entire structure expresses the doctrine of trinity, with Ethiopia being home to one of the world’s oldest Christian communities, with historians generally stating that the country adopted Christianity as its faith in the 4th century.
Mulugeta continues to hold regular Sunday services and has a replica of the Ark of the Covenant in its inner sanctum, a hallmark of Orthodox Christian churches in the nation.
Mulugeta is well-versed in the artworks that coat the inner wall, providing visitors with such insights that images where a figure only has one visible eye denotes a non-Christian.
He adds that he can’t point out all the intricacies in the paintings to visitors for time reasons, given the huge number of paintings that await guests.
“If I told guests of all the pictures, probably three days wouldn’t be enough,” Mulugeta says. “That’s why I make it general.”
Ethiopian Airlines links Toronto and Addis Ababa with non-stop service. More information can be found at ethiopianairlines.ca .