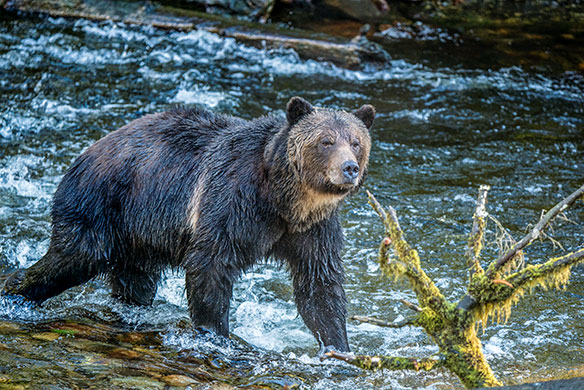 (Photo above: Grizzly bear from a bear-watching tour out of Farewell Harbour Lodge, part of the Great Bear Rainforest on Broughton Archipelago)

BC’s estimated 15,000 grizzlies can now, for the most part, wander the wilderness without fear of being felled by a hunter’s bullet. The law applies across the province with the exception of those areas that have been set aside for First Nations occupants, who retain traditional rights to hunt the bears for food, social and ceremonial purposes.
In other words, there are no longer hunting licences available for sale to non-aboriginals, including the many hunters who have come to Canada from the US each year for grizzly “trophy” hunting in the fall and spring.

Opposition to new law
This was not good news for BC guide outfitters, whose business has been to offer guiding services to grizzly bear hunters. They voiced their opposition to the new law, saying that it was shaped by false science and populist pressures.
For instance, the BC Wildlife Federation says that the law was passed because it is politically popular and was green-lighted in the absence of scientific facts, without an analysis of long term implications. A study by the BC auditor general concluded “that grizzly bear hunting was considered a minor factor within the larger issue of habitat management,” said Alan Martin, director of strategic initiatives at the BC Wildlife Federation. He pointed to the Independent Audit of Grizzly Bear Management for support.
The Guide Outfitters Association of BC also responded, saying that the grizzly bear hunt was managed by strict regulations that allowed just 2% of the bear population to be killed per year – below the 6% that is considered to be a sustainable rate.
But indeed, the great majority of people in British Columbia were in favour of outlawing the grizzly bear trophy hunt. For example, an independent poll by Insights West in 2015 found that 91% of British Columbians were opposed to the hunt. Another study by the BC government in 2017 indicated that 78% of the survey group wanted the hunt to end.
And, not surprisingly, the new law was welcomed by tour operators that offer grizzly bear viewing and grizzly bear photography programs in BC.

Operator welcomes new law
“We are very happy to see the ban on hunting grizzly bears go into effect. It has been the result of hard work by a lot of interested parties for over a decade,” said Tom Rivest, the co-owner of Great Bear Nature Tours in Port Hardy. He noted that the Commercial Bear Viewing Association of BC, of which he is a founder, was a key participant in achieving this goal.
As an operator of grizzly viewing tours since 1999, Rivest has deep insights to the potential impact of the new ruling on the grizzly viewing business. For instance, the termination of the hunt doesn’t necessarily create more locations for bear viewing, he said, but it does improve the quality of bear viewing in those naturally good locations. That’s because more bears will frequent these locations even if humans are present, once they realize they are not being hunted, he said.
“But you still need a site with reasonable access costs and a local bear food supply that attracts a sufficient number of bears on a predictable basis,” said Rivest. “Plus you need the ability to get a permit from the BC and First Nations governments. Competition in bear viewing has been slowly growing over the last two decades, but demand seems to be outpacing growth thus far.”
Rivest speculated that growth in the bear-viewing tourism sector may vary according to their regional locations. “Uncertainties from unresolved land claims are probably a bigger deterrent to the rapid expansion of bear viewing businesses on the BC coast than hunting was. In the interior where land access is easier, the cessation of hunting may indeed increase the number of bear-viewing businesses, especially over the next five to 10 years,” he said.

Economics favour bear viewing
A study from 2014 also confirmed economic arguments in favour of bear viewing businesses. The Economic Impact of Bear Viewing and Bear Hunting in the Great Bear Rainforest of BC was undertaken by the US-based Center for Responsible Travel. It focused on the Central and North Coast of British Columbia, which is better known as the Great Bear Rainforest.
“The overwhelming conclusion is that bear viewing in the Great Bear Rainforest generates far more value to the economy, both in terms of total visitor expenditures and GDP, and provides greater employment opportunities and returns to government than does bear hunting,” said the study.
The study revealed that: “In 2012, bear-viewing companies in the GBF generated more than 12 times more in visitor spending than bear hunting: viewing expenditures were $15.1 million, while guided non-resident and resident hunters combined generated $1.2 million.”
It also found that organized bear-viewing activities are generating over 11 times more in direct revenue for the BC government than bear hunting carried out by guide outfitters. The GDP is $7.3 million for bear viewing and $660,500 for non-resident and resident hunting combined.

First Nations thumbs-up
And regardless of special allowances, the new law that strikes down the grizzly bear hunt was given a general thumbs-up by an aboriginal tourism stakeholder and strategist.
“The new BC government policy supporting the protection of grizzly bears is important for the Indigenous tourism industry in British Columbia,” said Keith Henry, president and CEO of the Indigenous Tourism Association of Canada (ITAC).
“There are coastal First Nation tourism businesses who harness the visitor interest with bear viewing such as Spirit Bear Lodge in Klemtu or Gitga’at Spirit Tours in Hartley Bay. More importantly, the protection of the Great Bear Rainforest has resulted in a new vision for developing Indigenous tourism on coastal BC. It is these reasons that support the decision.”