Home › Digital Post › Finding the balance on the road to success

Finding the balance on the road to success 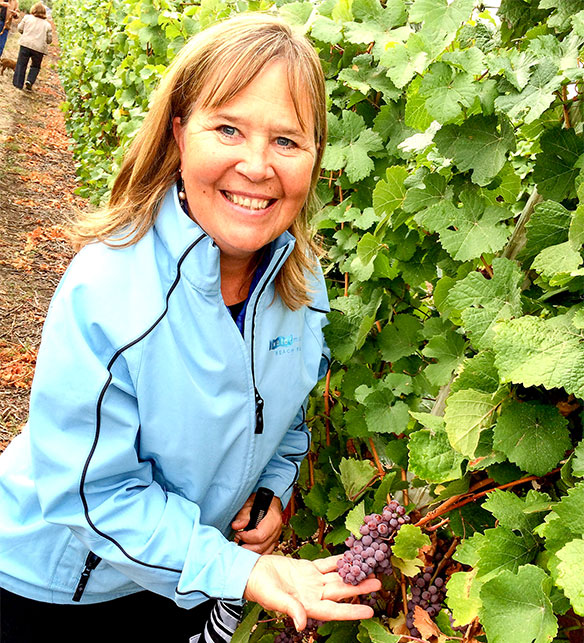 (Photo above: Jarrett at a local winery in the Okanagan Valley)

They’re movers and shakers. Their contributions have changed and continue to change the nature of travel, both in Canada and around the world. In this week’s issue, Canadian Travel Press’ series of profiles on Women in Travel continues with Ingrid Jarrett, the General Manager and VP of Business Development for Watermark Beach Resort, the President of Ingrid Jarrett Management Consulting, and one of Canada’s Most Powerful Women by the WXN.

To illustrate the impact of immersive travel, Ingrid Jarrett tells the tale of arriving in Fiji at 4 a.m. with her daughters in tow.
“There were three gorgeous Fijian men in sarongs playing guitars and singing a Fijian ballad to us, and we got off on the tarmac and everyone was so tired and so cranky, and all of a sudden we were on vacation,” she recalls. “It was just beautiful. I cite that in so many presentations – I do quite a bit of public speaking, which I love to do – and that shows you that it’s all about being immersed and how we as people can impact other people in incredible ways.”
Growing up in a city where the main industry was tourism, the General Manager and VP of Business Development for Watermark Beach Resort, and the President of Ingrid Jarrett Management Consulting, says a career in hospitality and tourism was a natural progression.
“I’ve been in the industry since I was 14,” she smiles. “I started when they still called it room attendants/chambermaids!”
Along with her position at Watermark and running her own firm, Jarrett – who has experience working at top hotels throughout BC like the Fairmont Hotel Vancouver, and was integral in the development of many other boutique hotels and resorts such as Nita Lake Lodge, Blackrock Oceanfront Resort, The Oswego and L’Hermitage – sits on the board for several committees and destinations that impact BC’s tourism community. Although no two days on the job are the same, she says all the roles complement one another by centring around developing strategies for growth in tourism and hospitality.
“I have the most fun job in the world,” she says. “First of all, it’s about championing passionate people doing what they love and building out a really relevant experience for what the travel consumer is looking for, and that is domestic, international, seasonal, there’s just so many different opportunities within our region. Within the tourism industry, every contract is different and every day is different. I just love what I do.”

On mentors and mentorship
Jarrett was recently named one of Canada’s most powerful women in the annual Top 100 Awards by the Women’s Executive Network (WXN), which celebrate the profes-
sional achievements of remarkable female leaders across nine different categories.
“There were two hoteliers there – there was me as an independent private consulting company and there was the owner of Germain Hotels, and you know travel and tourism from an economy perspective in our country is not recognized the way banking or finance or software or those kind of mainstream fields,” she says. “So, I was incredibly proud to be next to the CEO of the Royal Bank of Canada, or the only female commander in the Canadian navy, or these brilliant female entrepreneurs that are doing remarkable things in medical research… It was extraordinary to be there representing my industry and being recognized by my peers.”
As a recipient in the RBC Champions awards category, Jarrett was recognized for making a difference to the advancement of women in the Canadian workplace, and judged on criteria like her involvement as a role model, impact on other women, influence as a change agent and for demonstrating community service.
“I was nominated by a handful of women that I have mentored in the hotel and tourism industry over the last 30 years, and that’s why the award meant so much to me because they recognized me for the contribution I made to their professional development,” she says.
Reflecting on her own mentors, she pinpoints Michael Lambert, a former senior VP for Canadian Pacific and Fairmont Hotels, as well as her father.
“When I started working at CP hotels, I was the manager of a restaurant and I, through five different Fairmont hotels, was really championed by Michael; and he set me aside one day and told me that he thought I was a leader of the future,” she says. “I had no problem phoning him and asking him for advice, he always made time for me; he would say come and sit in my office and have a cup of tea, and his confidence in me actually allowed me to believe in myself in a very, very male dominant industry.”
Meanwhile, her dad instilled the belief that she could do anything she wanted to, and that she had to work hard and be true to herself.
“Both of these men have really made a huge difference on my life professionally,” she notes. “I think what happens with mentorship is somebody that you respect or admire really sees something in you that is worth investing in. And when that happens, you end up having much more faith and much more confidence in your own ability, and I think it really encourages you to push the boundaries, not be afraid of being in front of the pack, being the leader that you’re capable of being. And it really is an inspiring thing within a professional industry.”

The road to success
Along with the recent accolade of being named one of Canada’s 100 most powerful women, she counts being the second female in 100 years to chair the BC Hotel Association and earning the President’s Award from the Economic Development Association of BC for her work on the Burns Lake Economic recovery strategy in 2012, as a few of her other career highlights.
“I was representing the tourism industry with the Burns Lake recovery project, and that was after a mill town lost their mill to a very dreadful fire; and I was able to come in and work with the community and the First Nations people and really take a look at what the opportunity might be to build tourism in that community,” she says.
Describing the secret to her success, she says it comes down to passion and influence.
“When you’re passionate about something and really enthusiastic, you tend to create momentum around you, and people want to have a part of whatever that is,” she says. “The other thing is I see opportunity everywhere, so it’s a matter of breaking that down and figuring out what makes sense, what doesn’t make sense, and then what skillset you need to make sure that you’re setting these businesses up for long-term success.”
Meanwhile, she believes her passion and expertise for ecotourism, culinary and agricultural tourism, and sustainable tourism within local communities, drive the success of her company.
Overall, she says working across the board with small businesses, medium businesses and very large companies keep her charged in different ways.
“I just love the tourism industry, it’s just diverse,” she says. “Every day is different. I’m involved with a lot of strategy work, a lot of business development and creating opportunities for independent businesses or people hire me to analyze their business and figure out how they could do differently, so that fiscally or financially, they’re more successful. It really is helping them get market ready and understanding what the consumer is looking for and what trends in travel are all about.” 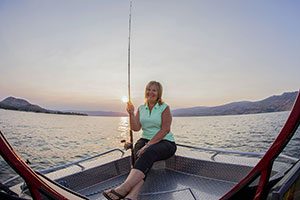 Jarrett fishing on the lake by Watermark Beach Resort

Finding balance
And, while there were highlights, she says there also were obstacles along the way such as advancing in a male dominant industry and striking the right work-life balance.
“I have three daughters that I raised on my own at the same time that I was managing some very big properties and developing teams and opening boutique hotels, so that balance was a challenge for me, but I really set the example for other women in industry that you can actually be a mom and you can also be an exemplary leader at the same time,” she says. “It means making
sure people understand when you’re at a piano
recital or you have to go to school for a parent-teacher interview they know where you are, and then when you come back, nobody questions you because everybody actually wants you to be there. So, it’s about not hiding it, but actually championing it.”

Looking ahead
As tourism continues to be a hotbed in Canada, she says labour – from development and training to recruitment – will be a big challenge for the industry in the year ahead.
“We’re seeing restaurants and hotels that literally do not have enough people to clean rooms or serve tables and that’s a significant problem when tourism at this point is reaching record numbers,” she says. “Our industry is very misunderstood from all levels of government, as well as other industries such as banking, finance, insurance, and the trades. I think making sure we understand the value of tourism, and that we work together at the national, provincial and local level to communicate how it contributes and what the opportunities are is going to be very important.”

What’s your favourite country or city to travel to?
My favourite country is either Italy or New Zealand. I love them both. My favourite city is probably Oslo. The art, the people, the history, the Vikings, it’s just amazing. It’s clean, it’s beautiful. They have art integrated everywhere in the city. People are very, very happy and very content.

Where are you based and how often are you on the road for work?
I’m based in the Okanagan Valley, and I probably spend two weeks out of every month either in Osoyoos or Vancouver, Calgary, Australia, or wherever else I may be depending on my contract work.

What’s your overall country count?
I’ve been to 19 so far.

What should someone not leave the Okanagan Valley without doing?
Definitely wine touring. The other one is fishing. I think really being immersed in Canada’s only desert and swimming in Canada’s warmest lake in Osoyoos, and we have the amazing bike trails for Kettle Valley Rail and the rail-to-trail system, which is several 100 miles of biking along the beautiful Okanagan, and when you come in the winter, it’s skiing.

What advice do you have for women thinking of getting into the industry?
If there’s ever a problem, be the one who figures out how to solve it. No. 2, I would say, your work-life balance is incredibly important. You don’t have to give up one for the other. Our industry is so filled with opportunity, and there are many positions up and coming in Canada, or around the world, so you can really look at where your passions lie and the world is your oyster. Work hard, don’t give up, take criticism well and humbly, and just make sure you do better the next time. It’s a very human industry, so understanding human relations and caring about people is the centrepiece because it’s really all about service.