Hanoi tour vehicles a reminder of the Vietnam War 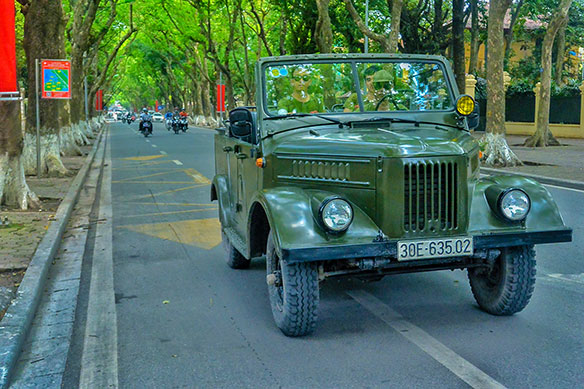 (Photo above: Goway clients can explore Hanoi in a Soviet military vehicle once used by the North Vietnamese Army.)

Goway’s Vietnam program has dropped what would certainly have been a terrible gas-guzzler that served as a reminder of the Vietnam War but tour operator clients visiting Hanoi can explore the city in another vehicle that also recalls that long-running conflict.

The company once gave clients an opportunity to be picked up in a tank upon arrival in the country, with Goway’s Diane Molzan suggesting that the armored vehicle arrival greeting probably fell victim to the “crazy cost” that the heavy, slow-moving vehicle would incur.

But Molzan adds those the tour operator sends to Hanoi can undertake tours in Soviet GAZ69 jeeps, with those military vehicles – in production from the mid-1950s to the early 1970s – used by the North Vietnamese Army and a holdover from the war.

Chauffeured half-day tours in the green GAZ69s – designed as a light, off-road vehicle for the Soviet military – are available in the capital city, with some Hanoi tour company promotional photos showing grinning Western tourists wearing military-style helmets while riding in the utilitarian vehicles.

“These days, who isn’t after that eye-catching Instagram selfie of driving through the streets of Hanoi in a beaten-up war vehicle?” Molzan asks. “Getting out of a cushy, leather-clad, air-conditioned mini-van hardly has the same appeal. Most clients want that immersive experience – the feeling of not just being a spectator.”

Molzan concedes that the vehicles designed to carry troops rather than tourists are “probably not that comfortable, but the tour is only a half day in the first place and travellers are expected to get out and explore. The repurposed jeep is merely a cool way to get from point A to B.”

But Molzan adds they also see areas of Hanoi that most tourists never get to. “The jeeps zigzag through the back alleyways and along the train tracks to the black markets, and along the entire way, clients will be introduced to local treats at some of the best street eateries.”

Molzan – who praises Vietnamese food as “incredible” and the country’s beaches as “gorgeous” – says Vietnam has that “feeling of the past mixed alongside the present, which isn’t a common thing in many countries anymore.”

Molzan adds that there’s interest in the war among visitors, hence some tours using vehicles from the conflict, including mighty tanks, known for having cramped interiors.

“Not too many people can say they’ve ridden in a tank, so there is some appeal there, but I’m not sure how easy it is to see the beauty of the countryside or the vibrancy of city life from inside a tank,” she states. “It’s probably one of those things that sounds better in concept than would be experienced practically.

“I supposes jeeps aren’t quite as cool as tanks but they’re probably more comfortable.”