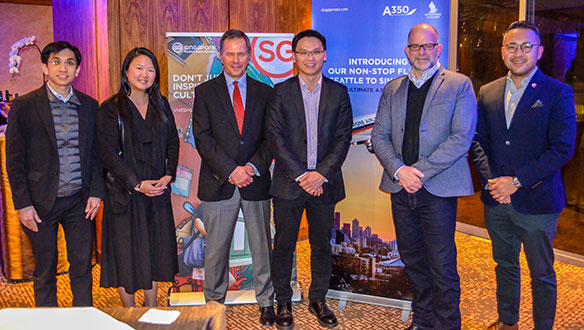 The word that Singapore Airlines was launching a new route to North America was officially out as of early November 2018, but the airline has recently started promoting the service to travel retailers. In late February, Singapore Airline executives embarked on a west coast mission to meet travel professionals, armed with the reasons why travel agents and tour operators should consider selling its new Seattle-Singapore service.

Those flights will start operating on Sept. 3 from Seattle-Tacoma International Airport on a three times per week basis, increasing to four times per week in October. Seattle is the fifth US city in the SIA network, and the fourth served non-stop from Singapore.

For Canadians in the western half of the country, the case for the new service is compelling, given the relatively short connection distance/time, and the service reputation that the airline has established during its history.

That’s been bolstered by the introduction of new cabin products in the recent past. For instance, the business class cabin offers one of the industry’s widest full-flat beds and a full suite of entertainment system choices, while economy class passengers get redesigned seats with new backrest seat cushions and side bolsters for better back support, ergonomically sculpted headrest cushions, and a seat pitch of 32 inches.

These will be found on the fuel-efficient A350-900 that SIA is operating on the route, which has been formatted with three classes of service – economy (187 seats), premium economy (24 seats) and business class (42 seats). The aircraft will depart Seattle at 10:40 on Tuesdays, Thursdays and Saturdays.

“Similar to our original A350-900 operations in San Francisco, we see great opportunity for a three-class aircraft configuration in Seattle,” says James Boyd, media relations rep for the airline.

The market not only has a robust corporate travel market, which tends to focus on the business class cabin, but also vibrant mainstream and ethnic leisure travel sectors, who are likely to be more interested in the premium economy and main cabin economy class products, he said.

The addition of Seattle to the airline’s US network is part of a broader expansion in this region that will see flight frequency increase by more than 40% – the largest expansion in SIA’s US history, says the airline. That ramp-up is timely, given the upcoming expansion of Cathay Pacific into the Seattle market.

Cathay Pacific will commence a new non-stop service from SeaTac International Airport to Hong Kong on April 1, with a schedule of four flights per week. This makes Seattle the airline’s eighth passenger gateway in the United States, and its 10th in North America, including Vancouver and Toronto. CX will also operate an Airbus A350-900 aircraft on the route. Flight number CX 857 will depart Seattle on Mondays, Wednesdays, Fridays and Sundays in the morning.

Not out of the question

Singapore Airlines currently operates 53 flights per week to Houston, Los Angeles, New York (both JFK and Newark) and San Francisco – including 27 non-stop flights to Singapore. With the introduction of the new Seattle flights, the total US frequency will increase to 57 flights per week.

For Canadians, the ideal news would be that Singapore Airlines was announcing the return of a flight schedule to Singapore from Canada. Previous SIA services operated from Vancouver, but these were terminated in April of 2009.
But the airline says the possibility of a return to Canada is not out of the question.

“We never say never,” says Boyd. “Canada has for many years been a very attractive destination for Singapore Airlines operations, and the points we serve within Southeast Asia continue to be highly sought after by Canadians for both leisure and business travel. We continue to monitor the market and are always open to exploring new service opportunities under the right circumstances.”