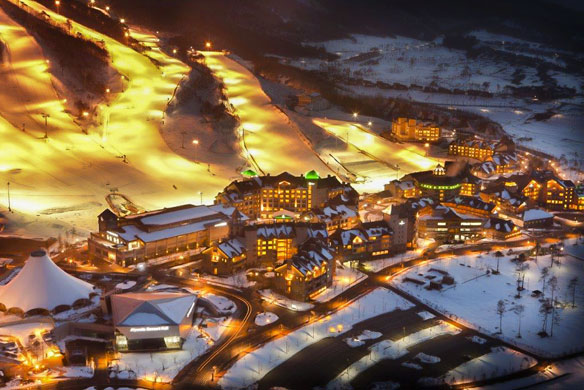 Let the Games-related excitement begin!
The PyeongChang Winter Olympics are nearing and that in turn has the Korea Tourism Organization upbeat about Korea’s upcoming tourism prospects, with John Hyungkwan Park – director of the KTO’s Canadian office – confident that the athletic spectacular will generate a huge amount of favourable publicity for his nation.
The Feb. 9-25 games will be watched by billions of people around the globe and Park is confident that they’ll be impressed by both the athletes competing in and the country hosting them.
“The world will be focusing on the Winter Games,” he told Travel Courier. “Whenever we [Koreans] do something we make it very successful.”
Seoul generated glowing reviews when it hosted the 1988 Summer Olympics. Korea will become the second Asian nation to host the Winter Olympics, with Japan having been the first.
The Winter Olympics will return to Asia when Beijing becomes the venue in 2022.
Large numbers of foreign visitors are expected to attend the games and Park said those on hand will be impressed by the organization behind the event. Events will be held in the PyeongChang area.
Many games attendees are expected to stay in Seoul and high-speed train service from the Korean capital to PyeongChang will take about 70 minutes, leading to relatively easy commutes. High-speed Incheon Airport-PyeongChang train service will table about 100 minutes.
The KTO will have a special train pass timed for the Olympics that Park said will have “very low prices” and have different lengths for travel throughout Korea.
Korea’s different seasons enable Korean athletes to succeed in different sports, among them the winter sport of speed skating, while Korea is now the dominant country on the LPGA women’s professional golf circuit. Park noted Korea has numerous golf courses that foreigners can play on.

Welcome news
Korea’s hosting its second Olympics is welcome news to Harold Ho of Royal Scenic, who told Travel Courier that the games will broaden interest in the Asian nation.
“This is a good thing,” he said. “Hosting the Winter Olympics will enhance the infrastructure of transportation and accommodation facilities to the region of Gangwon-do and PyeongChang, relatively new to overseas visitors, especially from North America as compared to other better known destinations like Seoul, Jeju and Busan. It will broaden the appeal of the variety of tourism products in Korea.”
Meanwhile, Park said people shouldn’t be nervous about visiting Korea because of the current tension between the American and North Korean governments. Park said North Korea’s stance amounts to a type of bluster that’s been heard before from its government and North Korea has no interest in provoking a military showdown with the United States, realizing the North Korean military would be massively overmatched by the huge US armed forces.