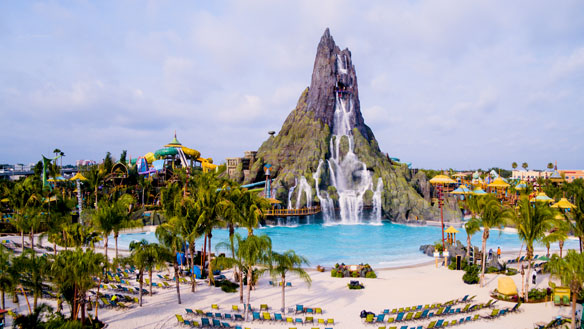 Families looking to get wet and wild can once again do so at Universal Orlando Resort with the May 25 opening of its newest theme park – Volcano Bay.
The impressive 25-acre water park replaces Universal’s former Wet ‘n Wild water park and features more than 18 attractions, from a serene winding river ride to the thrilling Ko’okiri Body Plunge, which takes riders atop the signature 200-foot volcano and features a 70-degree fall through a trap door before participants plunge 125 feet into the pool below.
The lush park has a South Pacific feel to it and utilizes new TapuTapu technology, a waterproof wearable which allows guests to virtually “wait in line” for rides, while enjoying other areas of the park, as well as make cashless purchases. 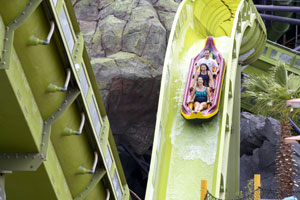 Thierry Coup, senior vice-president of Universal Creative, described Volcano Bay as a game changer in the water park experience, and a place where “families can be bold, let loose and connect.”
Tom Williams, chairman and CEO, Universal Parks & Resorts, added, “Universal’s Volcano Bay sets a new standard on every level – from the attractions to how our guests experience them. Our new water theme park is the perfect complement to the rest of our incredible destination. It provides our guests with spectacular entertainment experiences and innovative technology that helps them enjoy more of what matters most – connecting with each other and having an amazing time together.”
Volcano Bay features more than 30 experiences, including 18 unique attractions such as a multi-directional wave pool with sandy beaches, a peaceful winding river, twisting multi-rider raft rides, and speeding body slides that drop from the top of the volcano. 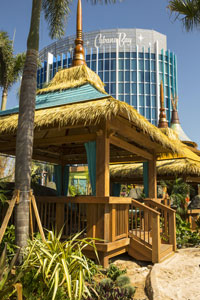 Krakatau Aqua Coaster is the star of the show – combining innovative ride technology with water theme park thrills to take families on an adventure through the park’s iconic 200-foot Krakatau volcano.
Guests board specially-designed canoes and propel downwards – and upwards – through the volcano’s interior peaks and valleys. They twist, turn and plummet along dark passageways until they are launched through waterfalls below.
Other Volcano Bay features include cabana rentals, a marketplace and six dining locations. These include Kohola Reef Restaurant & Social Club, Whakawaiwai Eats, Bambu, and The Feasting Frog, with dishes ranging from jerked mahi sandwiches to fresh island chicken salad to decadent chocolate pineapple upside-down cake. Those preferring traditional theme park food need not fear as options like chicken fingers, hamburgers and pizza are also available.
Most notable at the park is the TapuTapu wearable – included with admission and specifically designed for use within Universal’s Volcano Bay.
Features of TapuTapu include:
Virtual Line Access: TapuTapu allows agents’ clients to virtually wait in line for rides, while enjoying other areas of the park. Their wearable will simply alert them when it’s time for their ride.
TapTu Play: Your clients can enjoy many TapTu Play experiences throughout the park – like controlling streams of water spurting from whales in Tot Tiki Reef, shooting water cannons at visitors snaking down Kopiko Wai Winding River, illuminating images in the volcano’s hidden caves, and more.

TapTu Pay: Your clients can make purchases throughout the entire park with their TapuTapu wearable, eliminating the need to carry cash, credit cards or a wallet throughout the park.
TapTu Snap/My Universal Photo Access: Clients can take advantage of special interactive photo opportunities and “selfie-spots” throughout the park, as well as photo opportunities on Volcano Bay’s attractions. Their wearable will automatically link those photos to their account, so that they can view, share and purchase them at their convenience.
Locker Access: After renting lockers, guests will be able to access them with a touch of their TapuTapu wearable.
Volcano Bay is Universal Orlando’s third theme park – along with Universal Studios Florida and Islands of Adventure, not to mention Universal CityWalk Orlando, its dining and shopping venue – and the next chapter in the vacation destination’s evolution. Universal has invested significantly in its expansion plans – in just seven years, 25 new experiences have been added across the destination. These include the hugely popular The Wizarding World of Harry Potter, Diagon Alley, Skull Island: Reign of Kong, and Race Through New York Starring Jimmy Fallon.
Universal is also celebrating the opening of its newest on-site rooms – a two tower, 400-room expansion at Cabana Bay. These are the closest rooms to Volcano Bay and include special two-bedroom family suites.
Universal Orlando now has 5,600 rooms across its five (soon to be six with the addition of the Aventura Hotel now under construction) on-site hotels.
www.UniversalTravelAgents.com

The creative inspiration behind Volcano Bay
Volcano Bay, a tropical paradise formed by myth and discovered by legend, was discovered by the Waturi (wah-TOO-ree) islanders with the help of a mystical fish who was destined to guide them to a new home. 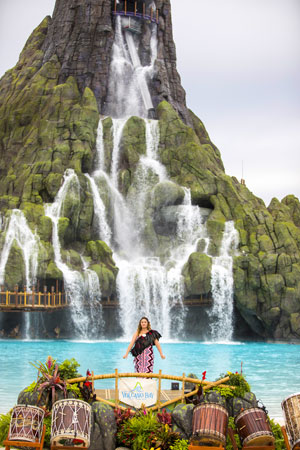 It began with the fiery god, Krakatau (kra-kuh-TAU). Though his wrath and fury dominated the land, he couldn’t contain the adventurous spirit of his daughter, Tai Nui (tie-NOO-ee). She fell in love with a native youth named Kala (KAH-lah). And when her fiercely protective father learned of the romance, he flew into a rage. He banished Kala forever to the sky, where he became the Moon.
Overcome with grief, Tai Nui’s tears became the Sea. Krakatau then realized he had only succeeded in destroying what mattered most to him – his daughter’s happiness. Determined to reunite the young lovers, he reached into the earth and pulled it to the sky – creating the volcano of Volcano Bay. Krakatau trapped the remains of his anger and jealousy in the form of the fire spirit, Vol, whom he imprisoned deep within the volcano.
This is how the Sky, Sea and Earth united to form the paradise of Volcano Bay.
The Waturi Legend: Before they came to Volcano Bay, the Waturi traversed the ocean in outrigger canoes in search of a new home. According to the legend, a mystical fish named Kunuku (koo-NOO-koo) was destined to guide them.
Their voyages took them to the far corners of the South Pacific. And, wherever they went, the Waturi embraced the customs, music and art of the many people they encountered. But alas, nowhere did they find Kunuku.
On and on they searched, until they came to the very edge of the world. And it was there that they found Kunuku playing in the waves. Within a day, Kunuku and the winds of fortune lead the travellers to the shores of Volcano Bay. The Waturi knew that, at long last, they had found home.
Upon arrival: When visitors come to Volcano Bay, they’ll be welcomed as one of the Waturi family. The islanders have never forgotten the kindness and generosity their ancestors encountered in their journeys across the Pacific. It is that same spirit of friendship that they extend to every guest who visits Volcano Bay.