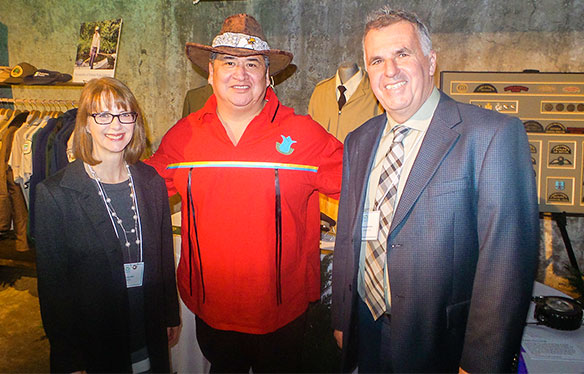 (Photo above: Among those on hand at the Ontario Parks event, from l to r, were Tracey Mill, assistant deputy minister of Ontario’s Ministry of Natural Resources; Chief Stacey LaForme of the Mississaugas of the New Credit First Nation; and Ontario Parks director Bruce Bateman.)

Bruce Bateman knows of some great parking spots.
The Ontario Parks director noted during a Jan. 9 Toronto gathering that this year marks the 125th anniversary of Ontario’s provincial parks system, which has grown from one park – Algonquin Provincial Park, this country’s oldest provincial park – to over 330 covering almost 8% of the province’s territory or over 8.2 million hectares of land. That amounts to more territory than Nova Scotia and Prince Edward Island combined.
Bateman said the growth in the number of parks in Ontario means Ontario Parks now provides an “exceptional system” of nature retreats in a jurisdiction in which sitting around park campfires was a ritual of childhood for many.
Many Ontario park vistas, including Algonquin Park landscapes, have been immortalized on canvas by the likes of the Group of Seven, whose artworks earned them widespread fame.
Ontario’s parks now see over 10 million visits a year, with the Ontario government urging Ontario residents to explore them, in parts through its Learn to Camp program.
“If you haven’t visited Ontario parks yet, this is the year to start,” Tracey Mill, assistant deputy minister of Ontario’s Ministry of Natural Resources told those on hand for a gathering that showcased the evolution of the parks system through different exhibits.
This year will see Ontario Parks stage a number of events marking the milestone, and visitors will find free day use of the retreats on July 20.
Ontario Parks is also a participant in the worldwide Healthy Parks Healthy People movement, which believes that park visits improve both physical and mental health.
Ontario’s parks were also praised by author and explorer James Raffan, who labelled them an “archipelago of treasure islands” that offer “antidotes” to sedentary lifestyles.
The paddling enthusiast also praised Ontario as “canoe country” and Canada as a “nation of rivers.”
Ontario Parks is reaching out to the province’s indigenous communities, stating that “indigenous culture is inextricably linked to the land,” and it wants to introduce people to it. Aboriginal speaker and poet Joseph Poitras in turn urged the audience to “maintain a good and fruitful” relationship with Mother Earth.
For more on the special festivals and events go to OntarioParks.com/op125 .