Making the world a better place… one trip at a time 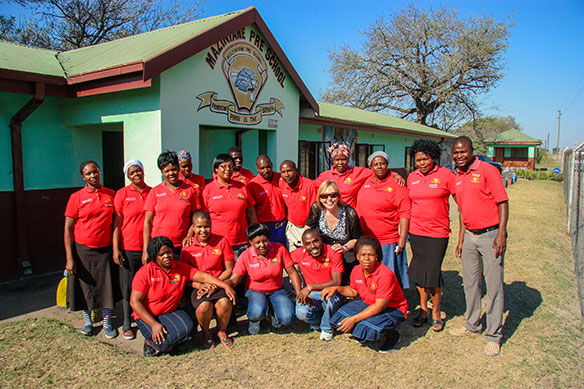 (Photo above: Schaubeck at the Mazinanye Preschool, the school she opened with her husband in 2002.)

They’re movers and shakers. Their contributions have changed and continue to change the nature of travel, both in Canada and around the world. In this week’s issue, Canadian Travel Press’ series of profiles on Women in Travel continues with Marianne Schaubeck of Reservations Africa and African Preschools Society.

Although she now specializes in creating customized packages throughout Africa and running a charity focused on building and maintaining preschools in impoverished rural African villages, Marianne Schaubeck got her start in the travel industry as an agent in the mid-’70s.
“I felt like it was the most exciting career anyone could have. I loved travelling and was always game to travel to pretty much any corner of the world. Fam trips were such an integral part of the industry as well, and I love them. I remember my first fam was to Hong Kong for 24 hours, and I thought I was such a jetsetter. The general public had a thirst for travel, and the travel industry was growing by leaps and bounds,” she recalls. “Before the ‘70s, travel was not mainstream at all, but the ‘70s changed everything; charter airlines came on the scene and introduced new destinations and affordable travel to the mass markets. The cruise industry was also reinventing itself with shorter itineraries, more ports and targeting this market as well.”
Having travelled to South Africa several times in the early ‘90s, she knew it was time to focus her attention on the destination when the apartheid era came to an end, and Nelson Mandela asked the UN to drop the sanctions. She sold her travel agency and launched Reservations Africa, a tour operator specializing in independent travel to Southern and East Africa, in 1994.
“In my opinion, this country was the perfect
tourist destination, especially for baby boomers,
and South Africa was still mostly an unknown destination for them. I just knew that if I loved travelling to South Africa as much as I did, so would my clients,” she says. “In the ‘90s, my vision was to offer quality affordable trips for the independent traveller. To provide quality control, I would only sell what I personally knew. In order for me to do this, I literally drove hundreds and hundreds of miles in South Africa and checked out countless guest houses, hotels and safari lodges.”
What started with a focus on South Africa, expanded to other safari countries like Botswana, Namibia, Zambia, Zimbabwe, Rwanda, Kenya, Tanzania, Uganda, and Mozambique.
“Once my clients discovered South Africa, a lot of them wanted to go back and do something else, so it became natural for me to branch out to the neighbouring countries,” she says. “The market has completely changed as well. It has always been a honeymoon and couple destination, but it now has also become a family destination. The baby boomers are now grandparents, and in many cases, they are taking their children and grandchildren to Africa.”
As for the itineraries, she says in the beginning clients would spend 14 to 18 nights in one country, whereas today, they are looking for only the highlights.
“Both their expectations and budget have increased dramatically, and they do cherry pick. I remember when I first started, my goal was to offer a 17-night itinerary including air for about $5,000 per person,” she says. “Now, the average itinerary excluding air ranges from $12,000 per person and up. Clients to Africa are now very savvy and want a true safari experience and adventure with creature comforts and in private concessions and are prepared to pay for this.”
As for the industry itself, she says the biggest change over the last few decades was computerization.
“I started in the era of handwriting tickets – and God forbid if a client lost their paper ticket! That was a nightmare in itself,” she says. “Consolidation and alliances is another big one. Of course, you can’t forget the ‘90s when the airlines went to zero commission overnight. Low-cost, no-frill airlines was another big change, and on the flip side, lie-flat premium business class seats reinvented premium travel and made long-haul enjoyable. But for me, without question, the Internet has had the biggest impact. Not only did it change communication and information, suddenly, your clients weren’t tied to your home city.” 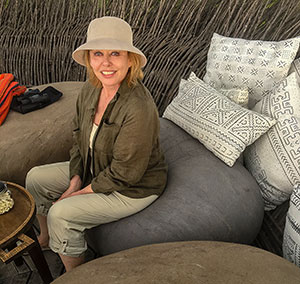 Lending a hand
Reflecting back on launching the African PreSchools Society, she says it was more like an accidental charity. Initially, the intention was to bring school supplies to a rural village outside of Sabi Sands, Kruger National Park, where nine local women voluntarily ran a preschool out of a one-room church.
“On our first visit, the only thing they had for 40 children were three or four baby blocks with the ABCs on them – that was it. It was a no-brainer, between my staff, my trips, clients’ trips, we could start bringing school supplies and have that room filled in no time and that we did,” she says. “Then, on one of our visits, they asked us for a school for all the stuff we have brought, as they had to take it home nightly. My husband and I were not expecting to be asked for a school. That never entered our minds. But, then we thought, why not.”
Since her husband, John Johnston (who goes by the stage name Johnny Bagpipes), does stand-up comedy for a living, they held numerous fundraisers, and in 2001, hired workers from the local village to begin construction on the school.
On May 16, 2002, they officially opened the 10-room Mazinanye Preschool. Describing the opening ceremony for the school, Schaubeck says she was an emotional wreck.
“What the community did for my husband and me at the opening ceremony was the most humbling, emotional experience,” she says. “On their own, they had brought in tarps and poles to put in the courtyard for shade, they brought curtains from home for a backdrop of the head table, and brought table cloths, they had rented a diesel P.A. system, as we didn’t have electricity yet. There must have been 1,000 people in the courtyard to show their appreciation, and when we walked into the courtyard, everyone stood. I never saw this coming. They were so appreciative. I was truly an emotional wreck!”
Once the school was open, she realized they had to become a registered charity in order to improve and sustain it.
“The preschool has 350-375 children and a staff of 19, eight of which are from the original days,” she says. “We turn no child away, and they come from the neighbouring villages.”
Over the years, they continued to improve the school, adding electricity, running water, 14 flush toilets, industrial kitchen appliances, playground equipment, DVD players in each of the classrooms, and WiFi.
“The charity also pays small salaries to the staff,” she says. “Now, we are expanding to include building a nursery on the same property as the preschool. Rural women are the backbone of Africa, and we want to provide a safe and healthy environment from zero to seven years, so the moms can continue to go to school or work or look for employment. This is truly my husband and my purpose in life.”
To this day, she says the charity and the preschool are her proudest achievement.
“To think that bringing a box of school supplies has evolved into this fairly large project is still mind-boggling to me, even after 20 years,” she says. “Well over half a million dollars has been spent including construction and day-to-day expenses on this project. Never in my wildest dreams could I have imagined this story. We are very proud of the fact that 100% of all donations go directly to the project. No office expenses or travel expenses are ever paid for by the charity. I am so happy I didn’t listen to people that told me we could never do it.”
Crediting the staff, who are very dedicated to the children, she says it’s very rewarding to see how well-run the school is.
“They follow the proper curriculum and take every early childhood development course that is offered to them,” she says. “I am most proud of our principal Luzile Khosa. When I met her in 1998, Luzile was a shy single mother of three daughters and spoke very little English. It was Luzile along with eight other women that had started the original preschool because she believed in early childhood development. With our chance meeting, we saw an opportunity to change her life. Fast forward to 2018, this confident woman is a community leader, involved in local politics, drives, and is computer literate. Her three daughters are all grown and have successful careers in the city. One daughter is a judge in Pretoria, one daughter is a civil engineer, and one daughter is an accountant. For me, personally, I am all about female empowerment and to see these changes is incredibly rewarding. I get very frustrated with some of the behaviour of the rural African man.”

Looking ahead
As for Reservations Africa, she says the best part of the job is getting to sell and travel to places she’s passionate about.
“To create dreams for clients is the best,” she says. “When clients return from their adventure, to hear their excitement in their voice when they are telling you about their trip is the best.”
Looking to the future, she says Africa remains high on people’s bucket list, which bodes well for the business.
“As long as people are still interested in doing Africa ‘right,’ I will continue,” she says.
“I want to complete the nursery in the next year. My goal is to ultimately just work to support the charity. As long as my brain is still functioning and I still love travelling to Africa, I will continue what I am doing.”

What advice do you have to share to those thinking of getting into the travel industry or starting their own business?
Know your stuff! I believe unless you know more than the client you can’t make it in the business. Invest in your own career. Find your passion and concentrate on that. You can’t be good at the entire world, you can only be mediocre, so concentrate on what you love and keep on top of it.

Often, travel leads to learning important lessons. Is there anything you learned while travelling that stands out?
I don’t know if these are lessons or observations, but I do believe everyone should travel to a country where they are a minority at least once in their life (and not in a group!). I think it would make for a better world. And, if you see something morally that you don’t agree with, do something about it.

What kind of challenges did you have to overcome in your career?
As a female, owning your own agency in the ‘80s was practically unheard of and not an easy feat. It was very much a boys’ club. I always found it interesting that 90% of agents were female and probably 90% of owners were men. In the ‘80s, banks were very reluctant to finance any female businesses. As frustrating as that was, in hindsight, it made me just work harder, it never discouraged me. I always believed in myself.

What do you think sets Reservations Africa apart from the competition?
The fact that we only sell what we have personally checked out. My staff and I travel to Africa yearly to maintain our product knowledge. We specialize in independent travel for medium- to high-end, and we don’t deviate from our niche.

Do you have anything to add?
I know the travel industry is notorious for low salaries, however, if you invest in your career and nurture clients, I still believe it’s a rewarding and financially viable career.