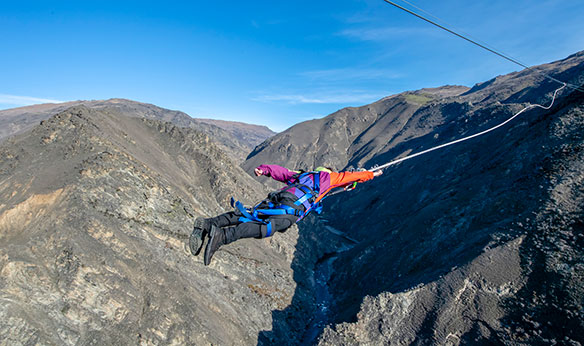 New Zealand’s newest thrill attraction is expected to fling people from far-flung locales.
The latest venture for Henry van Asch – who cofounded AJ Hackett Bungy New Zealand – is the Nevis Catapult, which flings people into the air in the remote Nevis Valley.
Those thrillseekers experience up to 3G of force and speeds of almost 100 km an hour in 1.5 seconds, as they’re propelled 150 metres across a ravine before suddenly dropping towards the valley floor and experiencing what are labelled a “series of jaw-dropping bounces… Housed in a pod and between a series of cables, the Catapult is a unique combination of height, flight and speed using a bespoke high-speed winch system developed over years of research.”
van Asch says he came up with the idea in the 1980s. Nine months of testing – beginning with weighted barrels, then test dummies and finally people – preceded the actual launch.
van Asch predicts that the Catapult – regulated under New Zealand adventure tourism and amusement device standards – will attract daredevils from far and wide to a country that has already given the world the likes of bungy jumping and zorbing.
“It’s going to be very scary for some – the harnessing system alone will get your blood pumping because it’s so comprehensive and often anticipating what’s coming next is as scary as the actual catapult itself,” van Asch says. “The speed is extreme. But what I love most about it is that the Catapult gives people another opportunity to push the boundaries, to challenge themselves and to live more and fear less.”
“New Zealand is full of once-in-a-lifetime experiences,” Bjoern Spreitzer of Tourism New Zealand says, citing the likes of scaling mountains, riding a jetboat or going whale-watching.
But Spreitzer quickly adds New Zealand isn’t for the fearless alone, pointing to such relaxed pursuits as wine tasting and viewing displays of Maori culture.
“There’s so much more to New Zealand than extreme adventure,” he states.