On track with Barbados!

2018 all about cuisine, visitors advised to pack an appetite 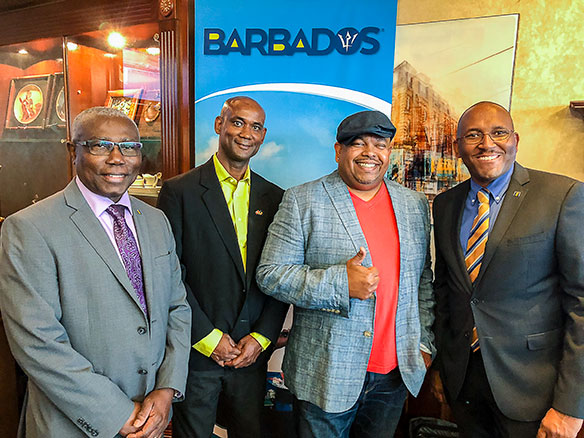 Despite the devastating destruction caused by hurricanes Irma and Maria in some parts of the Caribbean, many destinations are just fine and welcoming visitors, a message Peter Mayers, Canadian director of Barbados Tourism Marketing Inc. (BTMI), wants to get out.
Barbados is one of those destinations. Located in the southeast corridor of the Caribbean, Barbados came out “unscathed,” Mayers told a group of travel trade personnel during an Oct. 4 BTMI event at Woodbine Race Track in Toronto.
“One thing this has taught us is that there is a need for a geography lesson,” said Mayers. “We have to get the word out that most of the Caribbean is open for business.”
Apparently, there has been some confusion between Barbados and Barbuda.
Mayers thanked their Canadian partners for their support, noting that visitation numbers from Canada are up 12% as of the end of August and with a strong October and November are on track to meet last year’s numbers.
Barbados, which has plenty of direct access from Canada including Air Canada, Air Canada Rouge and WestJet, is known as the culinary capital of the Caribbean, and Mayers advises that visitors “pack their appetite.”
Kicking off this year will be the new “Sugar & Rum Season,” offering visitors an “authentic Caribbean” experience from December through April.
“2018 is going to be all about things culinary,” said Mayers. “You can eat a great meal in Barbados every day of the year.”
One must-do culinary experience falling under the “community tourism” category is the Oistins Fish Fry on Friday nights, which Mayers noted many hotels are now incorporating as an excursion for guests. The popular Barbados Food & Rum Festival runs from Nov. 16-19.
Another tourism focus will be romance, which Mayers says has three pillars – weddings, honeymoons and “just because.”
“It’s a recession-proof niche,” he said.
www.visitbarbados.org