Home › Digital Post › One ID: A step closer to reality

One ID: A step closer to reality 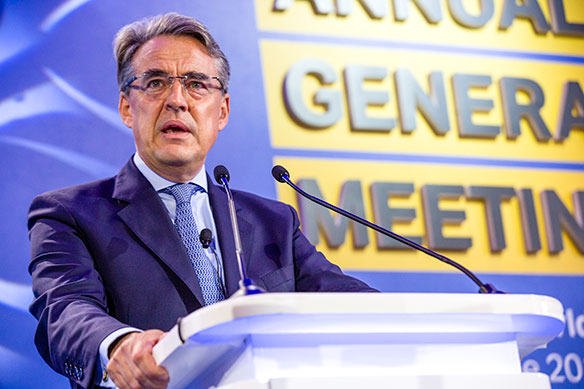 End-to-end seamless travel across borders came a step closer to reality when IATA member airlines meeting in Seoul for this year’s AGM unanimously resolved to accelerate the global implementation of the One ID initiative, which will be based on a single biometric identifier to move passengers through airports without the need for paper travel documents.

Prior to the vote, IATA director general Alexandre de Juniac told delegates, “One ID will boost efficiency from check-in to boarding to the benefit of passengers, airports and control authorities.”

“To make this happen, we must work with governments to agree on global standards, harmonize approaches, sort out privacy issues, integrate with existing infrastructure, and agree to the implementation process,” explained de Juniac.

And he added, “Every traveller will appreciate the convenience of getting from the curb to the gate without ever having to show a paper passport or boarding pass.”

Pierre Charbonneau, IATA’s director of passenger experience and facilitation told an AGM press briefing, “Our vision is a paperless future where your face is all you need to travel around the world safely and securely, and this could happen tomorrow, if there’s the will.”

He declared, “It’s a no-brainer because every party benefits. For instance, One ID means arriving and departing passengers could co-mingle, freeing up airport space and 65% of surveyed passengers said they’d do anything to improve the current process.”

He added, “A standard interoperable and harmonized process is what we’re looking for, and we intend to manage the data securely to allay passenger fears about what’s
happening to their information.”

Meanwhile, the World Economic Forum (WEF) recently announced the launch of a Known Traveler Digital Identity (KTDI) pilot project that will result in the first end-to-end paperless journey between Canada and the Netherlands early next year.

The initiative forges collaboration between the two governments and their border authorities with industry partners Air Canada and KLM along with Pearson, Trudeau and Schiphol airports to create an interoperable system for secure and seamless travel, explained WEF mobility head Christoph Wolff at a Montreal airport briefing.

He explained, “By 2030, international air travel is expected to rise to 1.8 billion passengers – up 50% from 2016 and with current systems airports cannot keep up. This project offers a solution and will shape the future of aviation and security.”

According to a WEF backgrounder KTDI will provide a frictionless travel experience, while allowing passengers to have greater control over their personal data. The identity data usually stored on a passport chip will instead be securely stored and encrypted on a mobile device and passengers will be able to consent to share it with border authorities, airlines and technology pilot partners in advance.

The paper explained that passengers will establish a “known traveller status” over time through the accumulation of “attestations” or claims that are proven and declared by trusted partners, such as border agencies and recognized airlines.

And it pointed out that the result will be a reusable digital identity that will facilitate more streamlined and tailored interactions with governments, airlines and other partners.

“The KTDI pilot project will help facilitate seamless air travel and benefit the world economy by enhancing the traveller experience, while ensuring that cross-border security is maintained,” he offered.

Ankie Broekers-Knol, Netherlands minister for migration, added, “This project is a perfect example of the importance of public-private partnership in implementing innovations in the aviation sector and border management.”