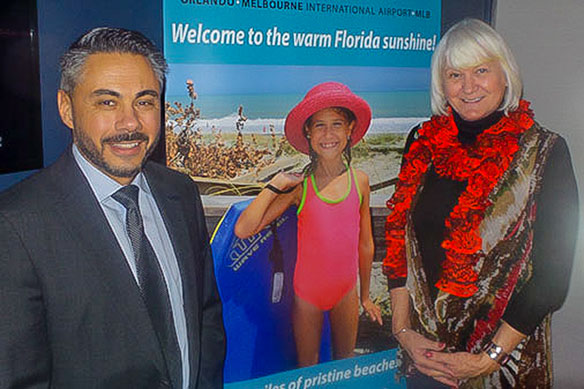 Porter Airlines is delivering Ontario residents wanting to flee winter weather to a Florida destination that’s seen as cool, but not cold.
The carrier now has winter service to Atlantic Ocean-fronting Florida’s Space Coast from Toronto, Ottawa and Windsor, with Toronto service continuing until April 7 and Ottawa and Windsor service running through March.
“We are thrilled and excited” about the Porter flights, Bonnie King of Space Coast Florida told a Jan. 11 Toronto gathering, adding Porter clients will be able to see “how cool the location is.”
King told the gathering that her region has 72 miles of beaches, wildlife – including alligators and manatees “galore” – and the only zoo in the United States that provides opportunities for “kayaking around the animals.”
The area is also the “surfing capital” of the east coast of the United States, she said.
The gathering was also told by Jarin Eisenberg of Melbourne Main Street that the city of Melbourne prides itself on authenticity, and doesn’t have any chain restaurants and stores.
Eisenberg added that Melbourne is home to historic structures that are modernized in a manner that preserves their integrity in a city that has kept its “small-town personal touch.”
Melbourne also has 10 large-scale murals with six more slated to appear in the coming months.
The area’s most famous draw is the Kennedy Space Center, billed as “the place where humankind first left Earth to explore the heavens,” and which chronicles the US space program. Visitors can, among other things, stand next to the Space Shuttle Atlantis, meet former astronauts, and see actual rockets at a site where 30 to 80 rockets will be launched this year.
“We want to educate people about space flight, and it’s never boring,” said the Kennedy Space Center Visitor Complex’s Gabriele Cornish, noting other available experiences at the “really interactive” facility include one that will “simulate living on Mars and having to do a mission.”
Space Coast Florida visitors are about an hour by car from popular Orlando, with Walt Disney World being less than an hour, enabling tourists to stay in Space Coast Florida and visit Orlando’s theme parks during the day.
Michael Curmi, director of Porter’s agency sales and distribution, praised Space Coast Florida’s tourism attributes.
“We know that there is a significant demand from Canadians to visit Florida during the winter, and Orlando-Melbourne is a fantastic gateway for travellers to see the variety of Atlantic Ocean coastal experiences and major attractions,” he said.
Orlando-Melbourne International Airport is making its mark in part by greeting those arriving from foreign destinations with bilingual or multilingual “international ambassadors” who immediately offer the new arrivals orange juice.
Airport spokesman Rob Himler also noted that the facility has completed a US$9-million renovation.
The region is also home to Port Canaveral, the world’s second-largest cruise port.