Home › Digital Post › Real cowboys are ‘the only kind we have’

Real cowboys are ‘the only kind we have’ 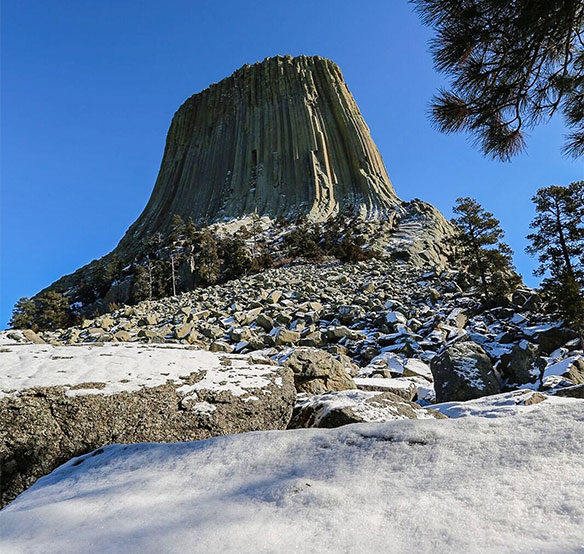 Tia Troy is inviting tourists to experience some close encounters of the eye-catchingly dramatic kind.
Troy, a spokeswoman for the Wyoming Office of Tourism, notes 2017 is the 40th anniversary of the movie Close Encounters of the Third Kind, in which iconic Wyoming landmark The Devil’s Tower featured prominently.
The massive rock formation was seen near the end of the movie, and its appearance in the Steven Spielberg classic gave it international fame, Troy says.
“We were pretty excited that he chose it,” says Troy, adding those who visit the natural attraction will see this “867-foot massive rock rising up out of mostly flatland landscapes.”
The Devil’s Tower – revered in area Indian culture – has largely sheer sides marked by deep groves.
Mile-long hikes around its base provide insights into it, says Troy, adding some 11 bat species are found near it.
An area amphitheatre is used for the likes of star-gazing, while a campground shows Close Encounters of The Third Kind nightly during summer.

Dramatic scenery
Troy adds Wyoming has plenty of other natural attributes, attributes she says often go unnoticed by people outside
the state.
“I think that honestly people think of Colorado and Utah [when they think of the US Rockies],” she continues. “We work hard
to promote Wyoming, but I think it often flies under the radar for some folks. The scenery is as dramatic [as in other Rocky Mountains US states] and our sparse population gives you more breathing room,” adds Troy, noting Wyoming only has one person for every 111 acres.
Some 96% of Yellowstone National Park – the oldest national park in the world – is in Wyoming, and those visiting the park may see the likes of bison, bears, moose, wolves, elk, and other creatures.
Yellowstone is also home to a remarkably large number of geysers, including Old Faithful, so named because it “goes off almost like clockwork,” Troy adds.
Other Wyoming natural highlights are the Killpecker Sand Dunes, the “second-largest active sand dunes” after those in the Sahara, and Bighorn Canyon, home to 1,000-foot walls.

History awaits
Troy says native Indian culture is on display in Wyoming, with Indian petroglyphs that may date back as much as 7,000 years awaiting tourists.
Nineteenth-century bat-tle-fields that saw fighting between Indians and US soldiers can be visited as well.
Troy says Wyoming is known as The Cowboy State, and cowboy culture is alive and well. “People ask: ‘Are those real cowboys?’” she reports. “We say: ‘That’s the only kind we have.’”
Tourists can stay at guest ranches, participating in the likes of cattle drives, if they choose. Troy adds that upscale ranches with “five-star dining” may offer visitors the likes of spa treatments, yoga and trail rides.
Troy says skiers will appreciate Jackson Hole, home to three ski resorts – Jackson Hole Mountain Resort, Grand Targhee and Snow King – and visitors will also find “vibrant dining,” along with other outdoor winter activities, such as dog-sledding and cross-country skiing.
Yellowstone National Park is open throughout the year, although road access is curtailed in winter, turning the park into what Troy calls a “haven for over-snow travel.” The park’s Old Faithful Snow Lodge and Mammoth lodge are open throughout winter, and area outfitters lead park excursions in that season, she notes.