Home › Digital Post › Out of the world getaway in Florida

Out of the world getaway in Florida 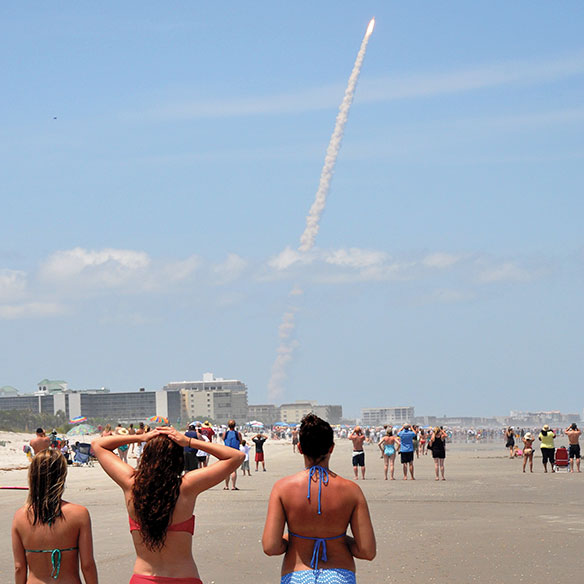 (Photo above: A rocket soars over a beach in the Melbourne, Florida, area. The area will see at least 32 rocket launches in 2018.)
Photo courtesy /SPACE COAST TDC

Orlando Melbourne International Airport users who time their Florida vacations right can see NASA light up the night in an awe-inspiring manner.
The airport serves an area that’s home to the Kennedy Space Center, from which in 2018 NASA will launch at least 32 rockets, some during the day and others after sundown, with the latter providing a particularly impressive celestial display, says Lori Brooker, airport spokeswoman.
“Until you see a launch, you can’t grasp the magnitude of seeing a rocket going up into space,” she says, adding a nighttime launch “lights up the whole sky.”
Those watching the launch from seaside Melbourne are “close enough to see, hear and feel it, but far away enough to see its full arc as it heads into the atmosphere.”

Warm welcome
And the airport also employs “international ambassadors” who speak at least two languages to greet the newly arrived, while wearing what Mia Ivey – who carries the title of lead international ambassador and is a former Walt Disney World employee – labels “Disney-inspired costumes.” They also have name tags similar to those worn by Disney employees.
Brooker says those ambassadors are a distinctly Orlando Melbourne International Airport touch. “We don’t tell the other airports about it.”
Melbourne visitors will find what Brooker labels “72 miles of uninterrupted beach.”
A specific area highlight is Sebastian Inlet, which Brooker calls “the most beautiful place in the world,” thanks to a combination of turquoise water and white sand.
Brooker says those visiting “historic downtown Melbourne” will find unique stores, an assortment of restaurants, craft beers and lively nightlife.
The Kennedy Space Center-affiliated Spaceport USA is open daily and allows visitors to see impressive reminders of the US space program, including the Space Shuttle Atlantis. Other possible highlights include opportunities to meet actual astronauts.
Brooker says that the Melbourne area is a great family destination offering a classical Florida-style beach vacation, with visitors able to enjoy paddleboarding and other water sports and build sand castles.
“It’s the old way to see Florida mixed with new attractions,” she says.