Sports gambling gets a boost in Las Vegas 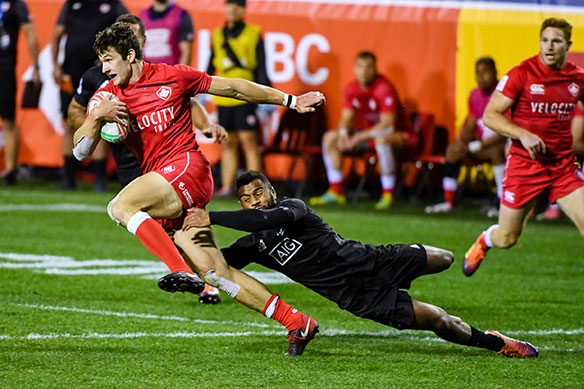 With recently liberalized federal laws for sports betting in the US, Las Vegas is gearing up for a new wave of gaming that may recall past glory days, when gambling ruled in the desert vacation mecca. While the changes have been applied across the nation, it is Las Vegas that stands to realize the biggest gains.

It’s too early yet to project the degree to which these benefits might accrue, says an executive at MGM Resorts International. But MGM has secured partnership agreements with a number of professional sports organizations across the United States, including the NHL, Major League Baseball, the NBA and, most recently, Major League Soccer.

The partnerships are being activated with a view to driving more bookings and gaming revenues at MGM properties. The degree to which these partnerships are achieving those goals has still not been disclosed, but there is general consensus that this will be a successful strategy.

For instance, the American Gaming Association released a report Oct. 2 saying the NHL’s annual revenue may increase by US$216 million because of legalized sports betting. NHL revenues exceeded US$4.5 billion last season.

Positive impact
“I think the impacts that we will see from sports betting are more indirect, but all positive, in the respect of fan connectivity and fanbase growth,” said NHL commissioner Gary Bettman in a prepared statement.

Bettman said MGM was a natural first partner for the League in the sports betting space because of pre-existing relationships. MGM is a part-owner of T-Mobile Arena, home of the Las Vegas Golden Knights.

Similarily, the National Basketball Association is looking ahead to bright partnership prospects. In this case, millions of NBA fans and MGM Resorts guests will be brought together “through an innovative collaboration that will open new and exciting opportunities to engage with each other’s world-class brands and products,” said an NBA statement.

The partnership is the NBA’s first with a sports betting operator in the US and was the first of its kind between MGM Resorts and a major professional sports league. MGM will use official NBA and WNBA data and branding for MGM’s land-based and digital sports betting operations throughout the US.

“Integrating the NBA’s assets and having official NBA data showcased across the MGM Resorts platforms will provide us with a distinct advantage and instill more confidence in knowing that our data is directly from the NBA,” said Jim Murren, the CEO of MGM Resorts International.

More bookings?
One of the more direct benefits should prove to be more room bookings at MGM properties. To that end, MGM has created new incentive programs for consumers and travel agents.

To maximize that effect, the company has many offers available across its hotel properties and dining venues around the city. For instance, New York-New York has a post-game Happy Hour for fans attending Golden Knights games, and there are drink specials at Aria, Vdara, Luxor, Park MGM, Mandalay Bay, and MGM Grand.

Fans also get some cash-saving considerations by MGM, in terms of their accommodations budget. During the regular season, they can get hockey game packages that include two tickets to a game at T-Mobile Arena and a two-night stay at either the Park MGM or New York-New York.

But measuring the impact of the gaming partnerships based on bookings and gaming income is still a work in progres. “Because this partnership came about less than year ago, it is still too early to know how the new partnerships and regulations may affect visitors. From a destination standpoint, it’s just too soon,” says the Las Vegas Convention & Visitors Bureau (LVCVA).

And more cryptically, “… financial terms of our partnerships are not public,” said Evans. “We work with all of our sports properties to meet each other’s strategic initiatives.” 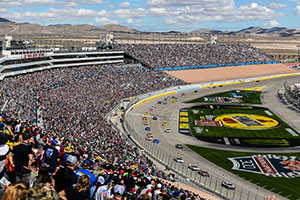 Eventual race winner Joey Logano heads into turn one during the Pennzoil 400 NASCAR race at the Las Vegas Motor Speedway in March.

Tracking the trends
Some insights are more instructive. For instance, “through February, visitor volumes to Las Vegas are up 2% for the year, but it is difficult to say if this is due to expanded sports betting,” says David Schwartz, a professor at the University of Las Vegas who tracks gaming trends.

It all bears watching for travel retailers, whether their clients are heading to Vegas for sports gambling, or to just take in a live game, apart from any betting. Either way, travel retailers and tour operators stand to benefit from more Las Vegas travel.

Ultimate Sports Weekend
One way that the city is helping to drive more interest in sports is through the Ultimate Vegas Sports Weekend, a jam-packed schedule of competition ranging from the race track to the rodeo to the arena.

Over one long weekend
in March, guests took in a busy schedule, including tournament play by 17 World Rugby Sevens teams at Sam Boyd Stadium; a night of UFC MMA fighting at T-Mobile Arena; high-speed auto racing at the Las Vegas Motor Speedway by the pilots of NASCAR; and on-ice play by the streaking NHL Las Vegas Golden Knights, also at T-Mobile Arena.

The Sports Weekend kicked off with a free Fan Fest at the Downtown Las Vegas Events Center, featuring interactive experiences, athlete appearances and a tailgate party to get fans in the mood for watching their chosen competitions.

But the major kickstarter for the Vegas sports gaming market – and Vegas sports in general – will be the arrival of the National Football League Raiders in town. Their first season is set for 2020, and by then the new Las Vegas Stadium will have been fully constructed, and the Raiders will have completed their move from their longtime home in Oakland, CA.

The new Las Vegas Stadium is being built on 25 hectares of land west of the Mandalay Bay Resort just west of Interstate 15, not far from the Strip, and an easy drive from the airport. It will have a glass-domed roof, giant retractable side curtains, a natural grass playing field and seating for 65,000. Construction is expected to finish in August 2020, in time for the inaugural season of play by the Las Vegas Raiders.

(Photo below: Cars head towards turn one during the Pennzoil 400 NASCAR at the Las Vegas Motor Speedway in March. The race was part of the Ultimate Vegas Sports Weekend. )