Sun shining as Transat takes off for winter 2020 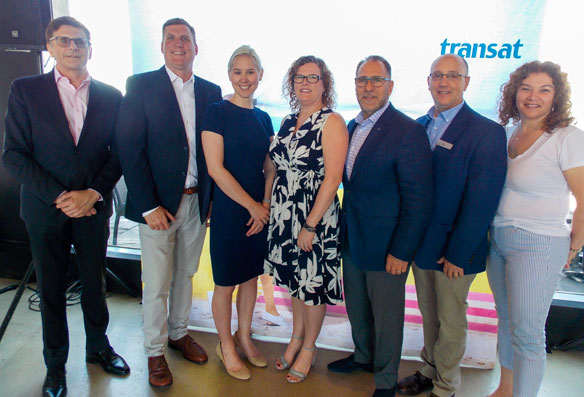 It was a beautiful day in Toronto as Transat welcomed a group of top-tier travel agency executives to The One Eighty on the 51st floor of the Manulife Centre for its VIP Sun Product launch last week.

Naturally, the crowd on hand was hoping for some insight into the exclusive negotiations currently going on between Air Canada and Transat.

In fact, it was the first thing that Joe Adamo, chief distribution officer for Transat, addressed, telling his audience, “If you’re expecting to hear a big update on what’s going on, well, I know what you know.”

He also made it clear that, “These are exciting times [for Transat]. It’s kind of nice to be wanted. We’ll see where this all goes.”

Adamo added that the one thing that he’s sure of is that the future for Transat, its employees and its customers is a strong and prosperous one, then segued into the point of the afternoon which was to talk about “some of the exciting developments” in Transat’s 2019-2020 winter program.

In this respect, Adamo said that with the addition of new aircraft – the Airbus A321neoLR – Transat will be taking things up a notch on both its South and Europe programs in the 2020 season.

Leisure, leisure, leisure
Gilles Ringwald, vice-president commercial for Transat, reminded the audience of agency VIPs just what Transat is all about.

And he pointed out that currently, Transat offers service to 60 destinations in 25 countries around the world, that “take you from home to your destination.”

Take the tour
Transat’s commercial director, Nicole Bursey guided the crowd through the company’s new winter 2020 offerings, which include the addition of New Orleans from Montreal and extending its operations to Barcelona and Rome out of Toronto until mid-January. As well, Transat will be operating Madrid and Malaga year-round from Montreal.

Bursey said that Transat is “significantly expanding” its program from Vancouver with the addition of Fort Lauderdale, Costa Rica and Punta Cana. It has also increased its offer from both Hamilton and London, noting that Hamilton has been growing steadily and that Transat will be offering Cuba from there this winter.

In all, Transat has 32 destinations in Mexico, South and Central America, the US and the Caribbean. The 2020 program features 700 hotels, with 24 new properties added, and it has enhanced its winter offerings to Europe this season.

As for cruises – which Transat sells as one-stop-shop packages – it is featuring 73 packages in the Caribbean, South and Central America from 12 ports of embarkation – new ports in 2020 include New Orleans (from Montreal) and Fort Lauderdale (from Vancouver).

Transat has its early booking bonus programs – for both its leisure and cruise packages – in the market now.