Teaching the trade how to sell paradise 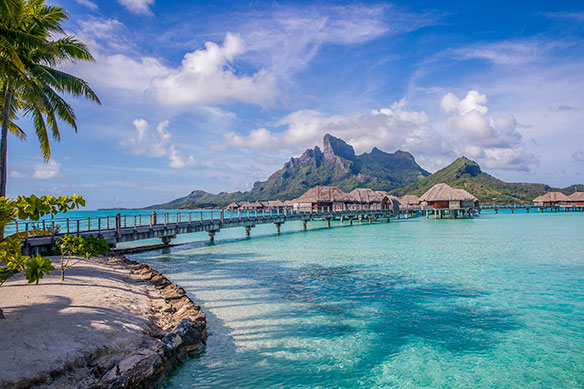 If you want to evoke images of paradise in people’s minds just say “Tahiti.” Then watch them close their eyes while they envision coral atolls cradled in aquamarine South Pacific lagoons, imagine themselves sunning on the deck of their overwater bungalow, going horseback riding through lush valleys, or cooling off in mountain waterfalls.
These visions become reality for visitors who add Tahiti to their travel bucket list, and late last year, they became reality for a group of North American travel professionals who visited Papeete for the 13th annual Tahiti Tourisme Exchange, held at the Tahiti Pearl Beach Hotel.
That was when these travel experts, like countless other professionals and visitors before them, found paradise in Tahiti.
The Tahiti Tourisme Exchange (TTE) is an intense one-day workshop that offers North American travel professionals like Quebec-based Mathieu Robert, cruise manager for Gendron Voyages, the chance to interact with local properties, services and operators.
“I found the setting and atmosphere really intimate and really valued the opportunity to meet directly with local operators,” says this first-time TTE visitor.
That was very nice. Though this is Robert’s first time at the conference, Gendron Voyages has been marketing this destination to a primarily Quebec clientele for more than 10 years.
“Here at TTE you meet all kinds of people and hear about different aspects of the destination,” says Normand Schafer from Far & Away Adventures, based in British Columbia.
Far & Away Adventures has offered French Polynesia and South Pacific options to Canadian visitors for roughly the past eight years.
“This event is a key part of a completely immersive experience,” he adds, noting that his first TTE event was eight years ago. “It’s a great way to learn about both the destination experience and how to sell it to Canadians.”

An Interactive Experience
Helping North American operators and agents promote this destination is the central goal, according to Kristin Carlos Kemper, the US managing director for Tahiti Tourisme. It’s a chance to “actually touch the destination,” says Kemper. “Our main focus is to offer an interactive experience.”
That interaction means that the 110 front-line, travel professionals from across North America get to meet and chat with 50 local suppliers who, Kemper says, “run the gamut of activities and excursions you can do in Tahiti.”
That range of activities was both a central theme at the conference itself and the biggest take away for Canadian agents and operators.
“One of our primary goals is to make industry aware of the diversity of our product,” says Tahiti Tourisme CEO Paul Sloan.
That diversity might be something as simple as the range of accommodation.
“You can stay in luxury hotels here,” says Sloan, “but we also have family-run guesthouses where you can interact with locals.”
Tahiti boasts two more selling points Sloan is quick to emphasize. “We’re the same time zone as Hawaii, so we’re a lot closer than you think.”
He also points out that Tahiti is perfectly suited for the ‘discerning traveller,’ offering an eloquent comparison that highlights one of the appeals of French Polynesia, telling CTP: “We see roughly the same number of visitors in a year as Hawaii gets in 10 days.”

More than Just Geography
Part of the diversity and appeal that makes Tahiti a ‘paradise found’ is simply its geography.
Located roughly halfway between California and Australia, Tahiti is comprised of five distinct island groups – more than 100 different islands that range from sky-reaching volcanic mountainous members to coral atolls, scattered like a king’s ransom across an area of the South Pacific bigger than western Europe.
Here in French Polynesia, visitors can sample the Society Islands (including Tahiti and sister islands boasting evocative names like Moorea and Bora Bora), Tuamotu Islands, Gambier Islands (the most isolated), the Marquesas with their pristine beaches and volcanic peaks and the Austral Islands in the south, a world apart from a world apart.
But Tahiti is more than just geography.

A Feeling of Connection
“Providing guests with the opportunity to stay in guesthouses or have other local cultural experiences where they can meet locals is one of our company’s niches,” says Normand Schafer from Far & Away Adventures.
And Tahiti is uniquely positioned to offer such opportunities, combining both European sophistication, sheer natural beauty and Polynesian charm and hospitality.
Most important, according to Sloan, “visitors leave here with a feeling of connection.”

The Canadian Connection
Due to the fluctuating value of the Canadian dollar and changes on the cruise ship scene the number of Canadian visitors has fallen off lately, but that is a challenge Tahiti Tourisme is working hard to address.
“It’s important to let Canadians understand Tahiti’s location,” says Sloan. “We’re just eight hours from Los Angeles.”
The next challenge, one they take very seriously, is reaching out to Canadian travel professionals in partnership with economic development and travel marketing leader, Development Counsellors International (DCI), out of its Toronto offices.
“Canada has always been one of the top 10 countries in terms of visitors, and we want to focus on this market,” Sloan emphasized. “We’ve recently opened a dedicated office in Canada, for example, with staff that offer expertise in both French and English.”
Tahiti Tourisme has also launched websites in both official languages that target the Canadian market, offering the training that agents need to become Tahiti specialists, including an upcoming online platform where those specialists can publicize their own tours or services in conjunction with the tourist board itself.

Paradise Found
One big takeaway, both in terms of the TTE experience and Tahiti Tourisme’s Canadian initiatives is the fact that focusing on Tahiti is a win-win for tourism in Tahiti itself and for Canadian travel professionals.
“Because there is a fixed price point when it comes to Tahiti, operators and agents can make a lot of money,” Sloan told CTP.
Yet, just as important for agents, says Sloan, is the fact that Tahiti is “a unique destination that’s secluded and exclusive and visitors have a high satisfaction rate.”
As for the Canadian travel professionals who participated in the Tahiti Tourisme Exchange – Claude Lariviere, Norman Schafer and Mathieu Robert among them – Kristin Kemper says they had the chance to “actually touch the destination.”
As Sloan sees it, they also had the opportunity to experience the same kind of connection that the vast majority of Tahiti’s visitors experience.
“They will leave changed as a result of the human connection they will discover on one of the most beautiful places on earth.” he observed.
Montreal-based Tours Chanteclerc’s Claude Lariviere knows Tahiti well. Chanteclerc has offered Tahiti adventures to a primarily Quebec clientele for better than 30 years, and Lariviere himself has worked with the destination for a quarter of a century.
His take on Tahiti is both informed and to the point.
“Tahiti,” says Lariviere, “is paradise on earth.”
He’s just one more travel professional who has found paradise on Tahiti. 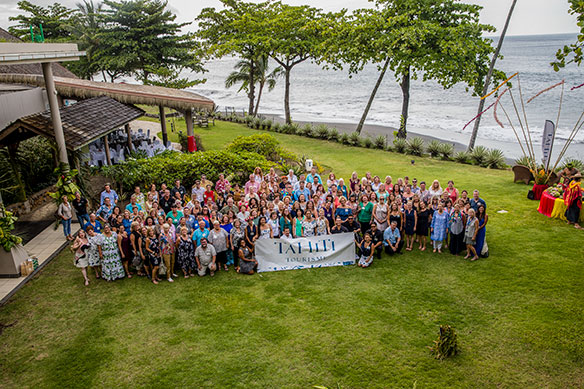