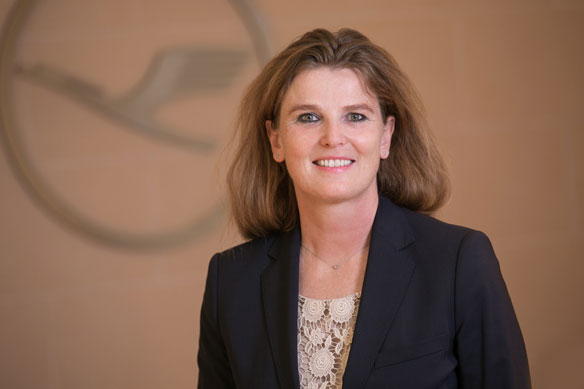 This week – in the final part of a two-part conversation – Heike Birlenbach talks about how the Lufthansa Group is charting a course into the future, while taking care of the day-to-day challenges faced by a global airline.

One of the things that Heike Birlenbach, Lufthansa Group’s senior vice-president sales for Lufthansa Hub Airlines and chief commercial officer (CCO) Hub Frankfurt, will tell you is that a critical aspect of her job is “understanding today what’s going to happen tomorrow in our industry.”

Birlenbach admits that’s quite a challenge, pointing out that along with taking care of the work and challenges of today, “you also have to be thinking about tomorrow.”

She regularly holds sessions with staff and managers to talk about the future of sales, noting that she invites Lufthansa’s “young talents” to join the conversation.

“You would be surprised how many interesting topics come up,” Birlenbach said of those meetings with the younger staffers. “They have completely different perspectives and collecting all those different perspectives, that gives you kind of a picture. You need to develop that, of course. It’s not that you ask somebody and say ‘Okay, there’s one person that knows what’s going to happen tomorrow.’ Rather it’s trying to figure out what could be a hint for future focus topics – so not to miss out on those.” 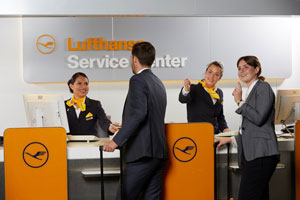 Birlenbach also sets time aside with her managers to talk about how the future might look and whether there might be hints from other industries “that give us some ideas on what could happen tomorrow in our industry or what are determining factors that are happening in our industry that will force us to think differently and with the youngsters, it’s really a lot.”

She says of these forward-looking sessions that: “I believe the secret is not to have a closed question. I don’t want to know what an account manager is doing tomorrow, but it’s rather making sure that you ask the question openly enough, so that they come up with all kinds of ideas. What is sales? What does that mean? How do we position ourselves? What do you sell tomorrow?”

Birlenbach continued: “I believe it is necessary, in my job, to make sure you leave some time in order to discuss that without finding any clear answers immediately; rather to find some topics that you believe, ‘Hey, that’s interesting, we should look into that better.’ For example, we’re now looking into Voice Interaction. How does that influence our businesses in the future? We see it already now in other industries. Voice Interaction is becoming more relevant, so what does it mean for us – for the airline business, or for the travel business.”

Let’s get integrated
And the Lufthansa Group’s hub airlines – Lufthansa, SWISS and Austrian – have certainly been forward looking in terms of integrating their resources in all of their commercial areas – a process that began several years ago and which focused on things like sales, revenue management, distribution, product development, airport infrastructure, and so on.

In sales, Birlenbach said “the aim is to safeguard or secure the brand positioning of the respective airlines.” 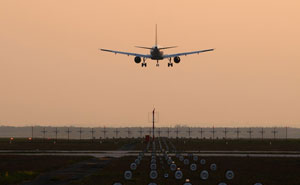 All of the hub carriers, Birlenbach told CTP have “a high value” proposition and are all different in certain ways, but there are areas, such as back office functions, where efficiencies can be realized.
Here, in Canada, the sales team sells all of the Group’s products just as every other sales team around the world does.

“There is no single airline-specific sales team anymore out there, and we are expanding that now,” she said, noting that today those sales teams are also selling some of Eurowings products, as well as Brussels Airlines.

So what’s the role of agencies in this? Could there be a more integrated relationship in the future?
“Well,” Birlenbach said, “we already partner with third parties – within the agency environment – and that’s certainly something. Partnership with them is key for us, but there is no discussion yet whether we would incorporate a business travel agency into our business.”

However, she continued: “We used to look into partnerships as partnering up with another airline like we did in the past with Air Canada, United [and] built joint ventures. Now, we also look into possible partnerships vertically – [it] could be agencies, but what that would look like is not yet defined. Do we just partner as we do today? Do we have more strategic partnerships? It could also be that we have a strategic collaboration in a different way.”

Going digital
Digital is certainly the buzz word of choice these days, and the Lufthansa Group has been an early adopter in this area.

As Birlenbach explains it, digitalization is all about “using the technological capabilities that are there in the marketplace, in order to provide products and services to our customers.”

She points out: “The digital field is very wide. So what do we offer in a digital way. Small things – we have e-journals on the flight instead of paper [magazines] on the flight. It’s more eco-friendly, and for the customer, [there’s] a huge range of variety.”

As well, she said there are digital apps for the Group, and it is also developing its own marketplace for its Lufthansa, SWISS and Austrian Airlines dot coms, where “we are able to display all of our offerings in a very transparent way and [in a] customer friendly [way]. The marketplace is where we have our fares and all the other product features – that are already developed and that will be developed in future – to present that to the customer, so that they can purchase it.”

Birlenbach told CTP that the Group also uses digital capabilities for a number of internal activities, in fact, right now, it is testing a Beta version of an automated rebooking option for its customers.

“The Beta version is already being used by customers, so they can check on it, and we are improving it before we come up with a [final] version.” 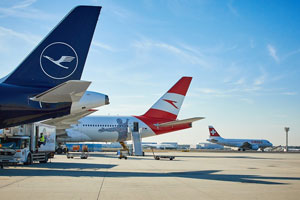 As well, the Group has a companion App on its Airbus 350 – already in service to Vancouver today, and, in future, it [the companion App] will soon be offered on Munich-Toronto and Munich-Montreal flights. The App, Birlenbach explained let’s “you combine your own device with the screen on your seat in the aircraft. So you can download a film ahead of time or the music that you’d like to listen to; so these are all kinds of features that provide a good customer experience and they are all digital.”

She continued: “Aside from all the developments I’ve just mentioned, we are already thinking about digital options for the day after tomorrow. We’re saying: Okay, what’s the future? If we jump really far, what will happen there?”

In searching for answers to those questions, the company launched the Lufthansa Innovation Hub in 2014 in Berlin; a second office is now open in Singapore; and a third one will be open soon in China.
The Hub, Birlenbach explained, looks at start-up companies working on features that “might be interesting for us, for the industry in future,” and if those features are of interest, the Group could look at “an option to invest in; to partner with; or to build on our own.”

“I believe this combination helps us to make sure that we don’t miss out on anything that might be an opportunity for our industry.”

Challenges ahead
Looking ahead to 2019, Birlenbach told CTP that: “What we see right now is that customer expectations are changing based on their experiences [with] other industries. So, response time from our side and the specific expectations need to be met, that’s simply the expectation of our customers. And yes, we are developing all kinds of features, but it also takes some time. So, it’s not a question of how much money we put on the table in order to develop all those things, it’s rather timing and IT infrastructure that is needed in order to be fast. So that’s one of the challenges.”

She continued: “We have a huge amount of projects. We would never miss out on ideas. We have plenty of ideas [about] what we’d like to do, and we are struggling sometimes about what to do first [because] we can’t do that all at once – even if we would put the money there, it’s just simply not possible to do that all at once. That’s another challenge.”

The number of aircraft in the sky, particularly in Europe, is another challenge, with Birlenbach telling CTP: “We have a special problem in Europe with the congestion on the Sky Highway. We are already talking about double lanes, and I believe we will still have a problem next year – it’s simply a lot of capacity in the sky.”

As a result of this, Birlenbach said that Luftansa has decided to control its growth, so that it “won’t grow dramatically, only by about 4% in 2019.”

Birlenbach also told CTP that Lufthansa expects to see consolidation in the airline industry, observing: “We believe it’s about to come in Europe. It happened already in North America quite a while ago and consolidation is due in Europe. There are so many different airlines. The Big Five airlines, just to give you an idea about the figures – so the Lufthansa Group, the Air France/KLM Group and the IAG Group, plus Ryanair and easyJet, those are the Big Five Groups – altogether we only make up for 44% of the capacity in Europe. If you compare that now to the United States where the consolidation has already happened, the Big Five [there] have about 85% of the total capacity. And as a leader in the industry, for Lufthansa, of course, we’d like to be an active partner in that kind of consolidation process.”