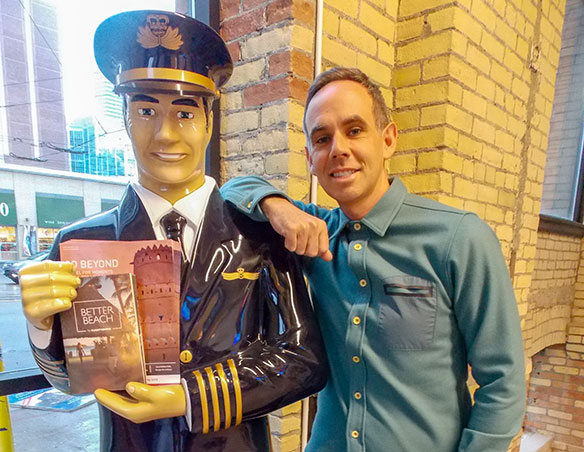 In the first part of a two-part interview with Flight Centre Canada’s Gavin Miller, the talk focuses on digital transformation and what that means for Flight Centre’s business in particular and the retail travel business in general.

Consider the hammer. Found in every toolbox. Indispensable for innumerable purposes. Yet without a human being picking it up and using it for the purpose for which it was designed, it’s totally useless.

That’s by way of preamble to a recent conversation that Canadian Travel Press had with Flight Centre Canada’s vice-president, retail, Gavin Miller on the subject of digitalization and what exactly it is that people mean when they talk about it.

While hammers weren’t mentioned in that conversation, Miller certainly views the relationship between people and technology in the same way.

“It’s an interesting question for us [Flight Centre], in that, I think there often is a belief that digitalization would be movement away from the human aspect – the person-to-person – to automation,” Miller began.

“At Flight Centre,” he explained, “we see it a little bit differently, in the fact that the strength of our business model is the person-to-person human connection that we have. The way we view digitalization is that we see Humans for the Best, Machines for the Rest.”

He continued: “It’s really about filling the gaps in-between to help our people be as productive as they can to help improve the customer experience, while never taking away the fact that everything we do is backed by a human. So that’s kind of the high level approach that we take from it.” 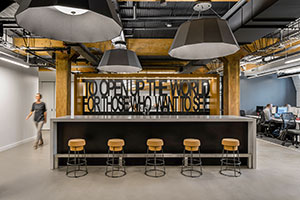 Make it easier
Transformation is another part of the puzzle that the industry is dealing with these days, and it’s usually a word that’s used in the same breath as digitalization – as in, digital transformation. But again, the question is exactly how is digitalization transforming the travel industry.

Miller’s response: “Well, I think we’ve already seen the first step of commodity-based products moving to an online approach. So whether that’s an online OTA [Online Travel Agency] or whether or not it’s an OBT [Online Booking Tool] that we give a corporate customer – and we’ve seen that first iteration – I think we’re seeing that that has a certain ceiling to it, in that there’s a complexity to travel that still relies so much on human [involvement].”

He continued: “I think the machines are going to continue to get smarter – and we need them to – but I would say the next sort of phase we’re going through is not the eradication of the agent or the travel manager, but actually I think they’re coming back into vogue because airfare buckets are complicated; the ancillary products are complicated; and destinations are becoming more convoluted to get to.”

As Miller sees it, with the digital approach, it will be about “how do we make it easy to communicate with our customers in a way that they feel like they’re in control, but are backed by a human, and I think that’s going to be an interesting balance.”

Whistles & Bells
Yet with digitalization – all of that emerging technology, software, apps that are out there – Miller agrees that there’s a danger of being deafened by all of the whistles and bells that accompany it and which can lead people astray.

“One of the things we’ve noticed is that it’s expected – [in order] to win a piece of business – that you have an OBT [Online Booking Tool] and that you have all those bells and whistles. But in the end, we have a very low adoption [of the OBT or those other bells & whistles]. So people see these bells & whistles. They believe that they want them and need them, but in the end, the adoption of actually using these things is quite minimal,” he said.

Miller said that “what we’re finding is that you have to strike a careful balance between having enough that customers want, but actually having only enough of what customers will use.”

“I think a lot people believe that all of these bells and whistles are really going to be integral to having a better experience, but in the end, it’s not,” Miller stated. “In the end, people want to go from A to B in a
single fashion. They want as few steps to get [them] there and they want as few clicks as possible.”

The bottom line for Miller is that: “It has to be useful and I think that is a real challenge for us in our industry. There’s a perception and there’s a belief that people want all of this shiny stuff, but in the end don’t use it.”

The Umapped example
On the other hand, Flight Centre’s fall 2018 acquisition of Umapped – the Montreal start-up that’s been grabbing a lot of attention in the travel industry in the last little while – is a perfect example of how digitalization can transform a travel business.

“It’s a great product,” Miller said. “it’s Canadian. It’s intuitive. It’s simple. It’s very well-built. Umapped is a really exciting addition to the Flight Centre family in that it’s one of our first acquisition pieces that is helping transform our business.”

He continued: “The vision around Umapped is that it’s exactly as I said before which is that what we want to do is give our customers an improved and enhanced experience, while allowing our people to shine. So, this incredible piece of software that they’ve developed, what it does is it’s incredibly user-friendly and allows a customer to have a digital, live, in-destination itinerary – so it’s fluid, everything is pushed to it. But what it also does is that it allows us to connect and to build a relationship with our customers through the platform itself.”

Miller explained: “If you’re in-destination and have a question, you just message me right through the application itself, and it forwards it on to me and then I can communicate with you through a chat feature. So, it creates a great in-destination tool – it allows us to communicate well with our customers in-destination, [and] that’s going to help with add-on sales because a lot of people don’t have everything predetermined beforehand.”

He told CTP: “The part that I’m most excited about is that it’s not just an itinerary solution, which is what they’ve developed. The next iteration for Umapped and this product for us is that it’s a point of difference in the proposal phase. If you think about book ending it, the proposal and the quote phase, to help show value, to help give our people a tool that sets them apart from our competitors in terms of being able to give high quality proposals, then also to build a sticky relationship after the fact.”

“At the end when you come back, it allows us to also build on future trips so that you have this sort of portfolio that allows us to build, and we just start building. [The customer] can add to it. [The counsellor] can add to it. So, it becomes a collaborative approach. The customer feels in control – feels like he or she can own as much of this process as possible and add stuff to it. And [the counsellor], as the expert, can also add things to it. So, it’s a collaboration right from the get-go.” 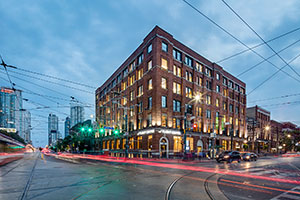 Beyond leisure
Right now, Flight Centre is using Umapped on the leisure side of its business, but Miller was quick to point out that: “It [Umapped] will move across to all of our business lines.”

He observed that: “For people who are travelling two or three times a week for business, they just want a very simple itinerary that looks simple and they know exactly where to look. So, it may look and feel a little bit differently to the [itinerary for the] individual going on that trip of a lifetime. What we have to figure out is how much do people need or not need or want.”

And Miller added: “The starting point is in the leisure space, and then I would say the next space will be to evolve it into the group space and then the MICE space and then business travel as well based on customer needs. But we really see this product as being the thread that ties everything together in terms of our experience right now with our customers.”

NEXT WEEK: Miller offers some insights on Flight Centre’s strategy in a digital world and provides a look ahead at what to expect in 2019.