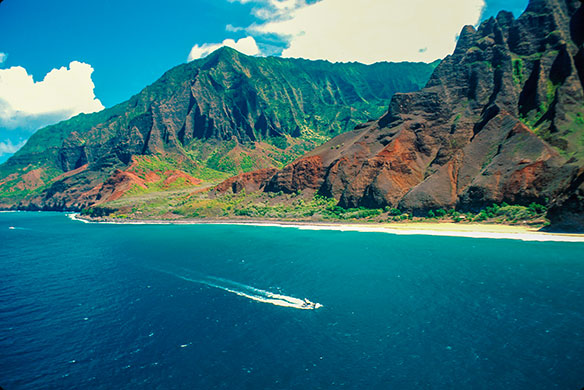 (Photo above: The Napali Coast is one of an endless number of Hawai’ian locales that offers stunning scenery.)

Colin Wood says Hawai‘i vacations never need to amount to more of the same.
Wood, Account Director for Hawai‘i Tourism Canada, notes those considering a Hawai‘i vacation have a choice of islands, with differences in those islands quickly becoming apparent to those that visit them.
“If people are not familiar with Hawai‘i, they might think of it as kind of a single destination,” Wood concedes. “That’s just not the case. Every island is a little different. They are all distinct destinations.”
Hawai’i is always popular with Canadian vacationers, attracting over 518,000 of us last year. The island of Maui, in particular, is popular with Canadians, with Wood speculating its popularity in part results from many of us having bought homes there long ago and then relaying to other Canadians how beautiful it is.
Canadians actually buck a Hawai‘i trend, with most visitors to the state opting to vacation in O‘ahu, home to Honolulu and its legendary Waikīkī Beach.
Honolulu serves as a cultural hub for Hawai‘i, Wood reports.
Maui, in turn, tends to be a little quieter than O’ahu, he adds.
Wood labels Kaua‘i an up-and-coming destination, with visitors routinely wowed by its scenery.

Lush and beautiful
“It’s lush, it’s green, it’s beautiful,” Wood says of Kaua‘i. “It has beautiful beaches, and it’s less developed than O‘ahu and Maui.”
Indeed, “beautiful, beautiful” Kaua‘i only has one escalator, which underscores that it very much remains a nature retreat, he continues.
The island of Hawai‘i, affectionately called the Big Island, offers visitors history (among other things, it was the birthplace of King Kamehameha I, the monarch who unified the Hawaiian islands), and Wood adds that the “range of activities is just incredible.” Those activities can include the likes of mountain biking, zip-lining and manta ray night dives, which have people hold on to a waterborne platform that has lights directed at the water after sundown, which attract curious, but harmless manta rays to the site.
The island of Hawai‘i has been in the news this year because of an active Kīlauea Volcano, which has forced people in the immediate area to leave. Wood insists that the affected area is tiny and hasn’t hurt overall Canadian visitations to the entire state. Some planning a Hawai‘i vacation may be avoiding the island of Hawai‘i, but those people generally go to another Hawai‘ian island, he reports.
The volcano has actually become a tourist attraction, with helicopter flights over it proving “highly popular,” Wood states. Those who go with a reputable operator can also undertake safe boat tours past the natural attraction, seeing lava work its way into the ocean and, therefore, “an island under construction.”

Surfing, anyone?
All Hawai‘ian islands enable visitors to try that iconic Hawai‘ian sport of surfing.
Wood believes that BC and Alberta at one time accounted for 75% of all Canadian visitations to Hawai‘i. But that figure is changing, he says, with those two provinces now likely accounting for 65% to 70% of Canadian visits, as Hawai‘i makes inroads in Quebec and Ontario. The increased interest in Hawai‘i among Quebec and Ontario residents is in part due to direct Toronto-Hawai‘i air service being available during the peak winter season.
Meanwhile, Wood has high praise for Hawai‘i Tourism’s partners in the contest, declaring that WestJet has “tons of flights” from this country to Hawai‘i, and that WestJet Vacations’ collection of Hawai’ian properties is “exemplary.”
Meanwhile, Hawai‘i Tourism Canada has teamed up with WestJet Vacations on a Hawai‘i vacation contest that has a grand prize that will award a lucky travel agent a trip for two to Hawai‘i that includes return flights courtesy of WestJet Vacations and a five-night stay at the Aston Kaanapali Shores on Maui, Hawai‘i. To enter, agents must answer the following question online at http://promo.baxter.net/contest/hawaii.asp and answer the skill-testing question. The deadline for entries is Oct. 31. Agents must be a full-time travel agent. For full contest rules and regulations, visit http://promo.baxter.net/contest/hawaii.asp.