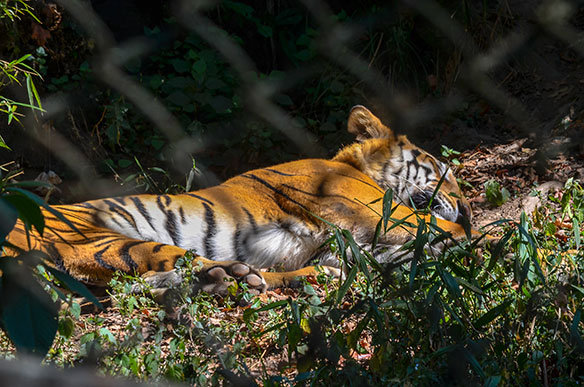 (Photo above: Snoozing in captivity. In India, some tigers end up in zoos, like this one in Darjeeling.)

International Tiger Day has just passed (July 29), once again spotlighting efforts to maintain and even increase the small population of tigers remaining in the world.
International Tiger Day has been in operation every year since 2010, when it was created at the St. Petersburg Tiger Summit.
This was done to raise awareness of the decline in the world population of wild tigers, which continues
to teeter on the brink of extinction. Organizations
like the WWF, the IFAW (International Fund for Animal Welfare) and the Smithsonian Institute mark the day to highlight an annual perspective on this population status, and to also celebrate the work of tiger conservators. Also, at that time, the 13 Asian nations with tiger populations committed to double the number of tigers by 2022.
Tourism plays a role in the fate of the wild tigers, but it is one that is complicated and even contradictory. That is, tourism commerce based on tigers has quickly grown, helping to finance conservation efforts. Nearly 1.5 million visited tiger reserves in 2015, fueling the growth of tours, hotels and resorts from this singular tourism sector.
The most visited tiger reserves in India are Bandipur National Park, Karnataka; Sunderbans National Park, West Bengal; Mudumalai National Park and Wildlife Sanctuary, Tamil Nadu; and Ranthambore National Park, Rajasthan.
There’s no other place on the planet comparable to India with as many tigers in the wild. But that number is relatively tiny, at 2,226 of the big cats, according to a 2016 count. Worldwide, the number of tigers is just under 3,200, keeping tigers on the IUCN Red List of Threatened Species.
With their distinctive stripes and immense size, tigers are one of the world’s most recognized and admired creatures. However, as tigers face threats from poaching and conflict with humans, their numbers continue to dwindle, says the Jane Goodall Institute.
India has about 70% of the global tiger population, and these animals live on 50 tiger reserves around the country. It is here that visitors converge for their hoped-for encounter with one of these impressive cats.
Hopes have become expectations of a sighting, as some tour operators portray and promote an encounter as happening with more certainty. This has been further driven by hype to include tiger viewing as a must-do item on travel “bucket lists.”
Given the fact that tigers are elusive and generally prefer to avoid the presence of humanity, tiger sightings in reserves are a question of knowledgeable guiding and good fortune. They are far from guaranteed.
But to help meet the rising tourism demands to see tigers, one India state has proposed creating a more confined tiger safari environment in which tiger viewing will be easily achieved. The state of Uttarakhand has approved the creation of a tiger safari experience which would adjoin the buffer area of the large Jim Corbett National Park.
The plan is to create a fenced, semi-natural area which will house 20 to 25 tigers. Those who have not been able to spot a tiger within the bounds of the Corbett park (1,318 sq. km.) will be able to go there instead.
However, opponents have voiced objections, saying that a safari park defeats the very purpose of creating wildlife sanctuaries. That is, there is a whole range of wildlife to be seen in a park like Corbett, including Asiatic elephant, leopards, wild boar, sloth bear, jackals, mongoose, and crocodiles – not just the iconic Bengal tiger.