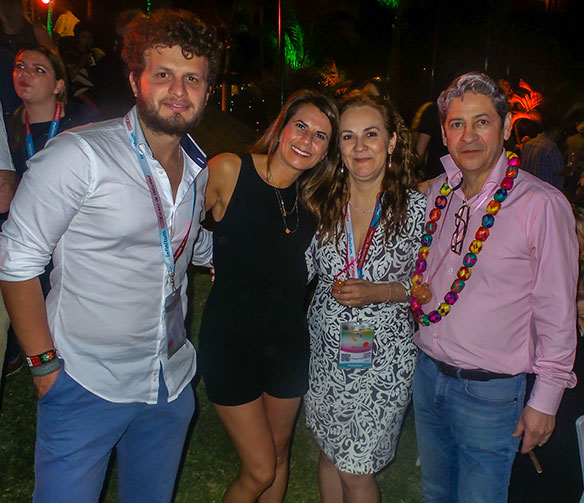 (Photo above: Among those on hand for a massive party the State of Guerrero held during Tianguis were Gabriel Cardona and Fernanda Rosas of the Mexico Tourism Board’s Montreal office; and Patricia Perez and Camilo Aguilar of Canandes.)

Mexican tourism authorities this month put the Pacific coastal city of Mazatlan squarely in the tourism limelight and, in doing so, helped promote a city that’s one of a number of destinations they believe is well worthy of large numbers of vacationers, but which is also overshadowed by such better-known locales as Cancun and Acapulco.
Mazatlan hosted the 43rd edition of Mexico’s annual tourism show Tianguis from April 15 to April 18, enabling a cross-section of the international tourism trade to see a city that combines beaches with colonial architecture.
Tianguis used to be an Acapulco event alone, but Mexican authorities now rotate it, with Acapulco hosting the show every second year.
This was Mazatlan’s first Tianguis.
“It’s a great opportunity to showcase the destination,” Guillermo Eguiarte – who once oversaw the Mexico Tourism Board’s Toronto office and is now based in Tokyo – told Travel Courier.
“I think it will be highly beneficial.”
Eguiarte – who led a Japanese delegation to the show – added foreign show attendees he met appreciated Mazatlan and wanted to stay longer.
The city also got the thumbs-up from Canadians on hand for the show.
TRULY MEXICAN
“I was very impressed how beautiful it is and how well we’re being treated,” Gabriela Enriquez of Toronto-based Exotic Destinations said of a destination that’s “kind of been put on the side” by Canadian vacationers. “It’s so nice that I would like to come back. I would recommend it [to clients].”
Eric Rodriguez of Sunwing – which sends people to Mazatlan from several cities in this country – called the Mexican city “an authentic Mexico with beach. We’re bullish with it,” he continued, adding there’s been a “huge amount” invested in the city’s infrastructure.
Gloria Nadeau of a Carlson Wagonlit agency in Toronto noted Mazatlan has a large colonial district and is a “true Mexico.”
Meanwhile, Toronto Uniglobe Enterprise travel agent Ethel Hansen Davey praised both Mazatlan and the show itself. “Mazatlan is one of my favourite Mexico destinations, so coming to Tianguis Turistico and staying at the luxurious El Cid El Moro was a treat for me. Mazatlan was pretty efficient as a host, with a few hiccups, as can be expected for a first time for this massive event. I love the pavilions for each state with DMCs and hoteliers inside each pavilion, and the people there in traditional costumes of their regions, as well as the handcrafted wares and textiles being featured. This travel trade show is one of the best in my opinion. Over the years, I have made so many contacts at Tianguis in order to offer new and exciting options to my clients and also, more importantly, to establish new friendships with our international travel ‘family’.
Tianguis came at a time when Mexican tourism is performing well, with Mexico now the sixth most-visited country in the world, hosting 39.3 million foreign visitors last year.