Tourism Ireland is ready for 2019

There’s no doubt that 2018 was a spectacular year for Irish tourism (see sidebar story), the question is – with the March 29 deadline for a Brexit deal looming large – whether the destination can expect the same kind of head-turning results in 2019.

“Brexit is a concern, there’s no question about that. It’s probably the biggest concern facing the Irish tourism industry,” Niall Gibbons, CEO of Tourism Ireland, told Canadian Travel Press during a recent visit to Toronto.

But he was quick to add: “I’m always optimistic. I have to be, we’re in tourism. We are looking to grow spend this year by 6%. That’s a really challenging figure, but I think we’ve got a very good strategy in place and I think we’re off to a good start to the year.”

To further help things keep ticking along, he noted that the Irish government has given the tourist board an additional 10 million euros in additional funding “which is terrific.”

Along with the good start and extra funds, Tourism Ireland has just launched a brand new marketing campaign – the first in seven years – called Fill Your Heart With Ireland, and it’s already creating a nice buzz. And that’s definitely another factor that gives Gibbons reason to be optimistic.

“The key message coming out of this campaign is that we’re living in a hyper-connected world, and Ireland is a country where you can really switch off from that and really renew your lust for life,” he told CTP.

Fill Your Heart with Ireland [https://www.youtube.com/atch?v=1dAkMZjxv9A] features a Swedish couple – they’re real people, not actors – who are equipped with a helmet camera that’s linked to a heart-activated monitor that reveals their “passion points” as they travel around Ireland.”

Market diversity
“We’ll be continuously renewing the campaign,” Gibbons explained, “but the core theme of Fill Your Heart With Ireland has resonated really well with consumers” and is designed to achieve Tourism Ireland’s goals of seasonal extension and regional growth.

“We’ve seen Ireland do really well in terms of volumes of visitors, but this [new campaign] is really trying to look at Quarter One and Quarter Four and also to push people to explore and discover the [different] regions of Ireland,” Tourism Ireland’s CEO added.

Market diversification is a strategy that Tourism Ireland has been following for quite a while now, and it’s one that Gibbons believes is well-suited to meet both current and future market challenges.

As Gibbons sees it: “Before Brexit was even thought of by anybody, we actually embarked in 2014 in the process of market diversification.” 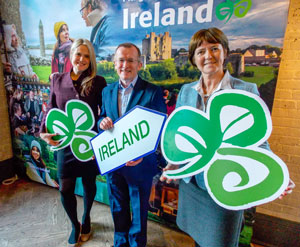 Seen here, from l to r, are Dana Welch, Niall Gibbons and Alison Metcalfe ready to welcome guests at the Toronto briefing on Tour-ism Ireland’s new Fill Your Heart With Ireland campaign.

In this respect, he pointed out: “The British market used to account for a significant portion of our revenue, but when you get down to the holiday revenue it now accounts for 18%. We don’t deny it’s a significant percentage, but it’s actually the North American market that accounts now for 30% of the total revenue. So, we’ve seen the mainland Europeans and North Americans grow in significant numbers, and British numbers have grown, but not as fast. So, we’ve got a really good balance and spread than what we used to have.”

But Tourism Ireland is leaving nothing to chance when it comes to being prepared for Brexit, with Gibbons telling CTP: “When the UK voted to leave the European Union back in 2016, we immediately established a UK-based Brexit Task Force which consisted of senior members of the Irish and UK tourism industries just to try and tease out what the issues were and how they might impact on us.”

He explained: “We also carried out consumer research in Britain to see whether Brexit would actually impact on their travel patterns. For example, 70 million British people will travel abroad this year, and we know from the surveys we carried out that they will continue to travel and they will continue to take their main holiday in countries like Spain, France, Turkey.”

Critical considerations
“The critical thing for us is that they continue to take short breaks – that’s where the uncertainty arises for Ireland. About 41% of British people travel in Quarter One and Quarter 4, so it’s very important for the off-peak and it’s really important as well for areas outside Dublin – so the rural economy is very dependent on the British visitor.”

Yet the good news, as Gibbons tells it, is that “we haven’t seen any [dimming] of British attitudes towards Ireland. They still love Ireland as a destination. They’re all aware of Ireland and how easy it is to get here, but we have to keep Ireland front of mind because there’s a huge batch of competition for those 70 million [British] travellers.”

For Tourism Ireland’s CEO another key point when talking about Brexit is that “the common travel area that exists between Ireland and the UK is going to continue. Legislation has been put in place for that. So, if you come to Ireland, you’re not going to see any difference in that, and things are just going to keep on going as normal.”

He continued: “There are technical issues that need to be resolved between the European Union and the UK in relation to tariffs and trade agreements, but that’s all going to have to be worked out politically.”

And Gibbons added: “I mean it’s important that the [EU and UK] get a deal done, there’s no question about that, but certainly from where we stand now, we’ve had a very positive 2018; we’re not denying that Brexit is a big risk factor for the tourism industry, but we’ve taken all the mitigating steps we possibly can and we’ll continue to monitor the situation on a week-to-week basis.”

As for whether Brexit is having any impact on North American travel intentions, Alison Metcalfe, VP North America & Australia for Tourism Ireland, told CTP that during a recent meeting with US tour operators, the message from them was that Brexit and “any issues about it, does not seem to be on the radar of American travellers at the moment.”

It’s all good
And, while Tourism Ireland hasn’t done any specific research on Brexit and the North American market, Metcalfe did say that the tourist board is currently doing some research in Canada to update its strategy in this market.

“What we find here is Canadians have a very positive image of Ireland. For those that haven’t been before, we have an opportunity to inspire them.”

Canadians, she said, are particularly interested in Ireland’s built heritage, scenery, landscape, activities, and “we’re dialing that up in our communications” in 2019.

She noted as well that the newly launched Fill Your Heart With Ireland campaign “is talking to that, in terms of talking to people’s passion points.”

Even better, Metcalfe said “the good thing about Canadians is that they like to spend money. When we talk about the Americans being high spenders, Canadians are equally high spenders, albeit in slightly smaller numbers, but they’re making an important contribution to the tourism revenue on the island of Ireland.”

In the end, Gibbons observes that: “Despite all the challenges, – because they’re always there and if it wasn’t Brexit, it would be something else – I really think we’ve got a good campaign, a good team and a good product. So, we’ll be back this time next year, and hopefully we’ll be reporting another solid year.”