Home › Digital Post › Travel in Nepal without reaching for the sky

Travel in Nepal without reaching for the sky 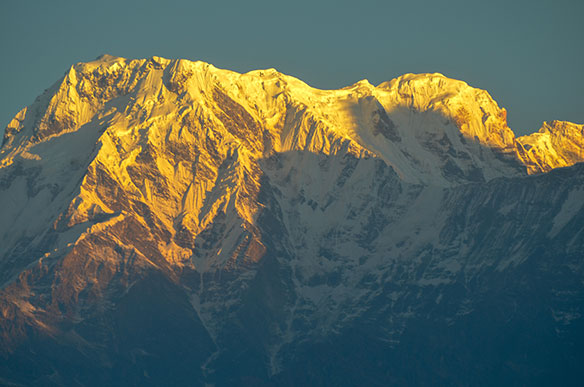 (Photo above: Sunrise on the Annapurna range near Pokhara.)

Not surprisingly, the effects of altitude on the human body are a common concern in any discussion of a visit to Nepal. This is the country that is defined by the highest mountains on the planet, including Mt. Everest, at the top. As such, images of Nepal often depict climbers in professional gear, wielding ice axes and scaling the peaks of the Himalayas.

Nepal is of course a premium destination for mountaineering, and it is those people who must make preparations for dealing with the thinner air at higher altitudes.

But luckily, there are many other tourism options in Nepal that don’t require climbing equipment and winter layers. And flatlanders can still get high enough into the Himalayas to catch some impressive views of the mountains, with a reasonable degree of fitness and preparation. These two types of travellers generally define the customer profiles for inbound tour operators in Nepal.

“When people consider Nepal, most of them think that it is only about trekking in the Himalayas, but it is necessary to know that Nepal has so much more to offer,” said Sulav Roka, general manager of Mountain Adventure Trekking, based in Kathmandu.

He pointed to the many UNESCO World Heritages Sites in the country, and destinations in Nepal such as Pokhara, Chitwan, Nagarkot, Dhulikhel, Lumbini, Bandipur and others.

He said that the number of tourists who visit Nepal for cultural/historical tours, nature sightseeing tours, honeymoons, jungle safaris (Chitwan National Park), yoga/meditation retreats, soft adventure and short, low-altitude treks is almost equal to those who come for more extensive trekking and mountaineering at higher levels.

“If we are talking about soft adventure, we are known for white water rafting, mountain biking, paragliding, ziplining and even hot air balloons now in Pokhara,” said Roka.

Treks into the mountains for these less intrepid visitors are low-altitude day-trips, with maybe one or two overnight stays in lodges called teahouses, to a maximum altitude of 3,000 metres. The average length of tour packages for these tourists ranges from three to 12 days, while the average length of stay for a trekking package is from six to 22 days, he said. 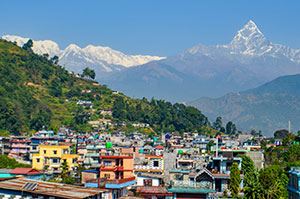 Fishtail Mtn. in the Annapurna range above Pokhara. 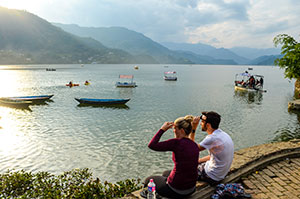 Sunset on Phewa Lake in Pokhara.

Starting In Kathmandu
International arrivals will almost certainly find themselves in the capital city of Kathmandu, home of the international airport, at the beginning of their trip. It sits at a no-stress altitude of 1,400 metres.
The city has an air of the exotic, with a storied history dating back to the 12th century. Most of its significant temples, palaces, stupas and other monuments date from this period. Kathmandu was also a centre of hippie pilgrimage in the 1960s and ‘70s, when Western pop culture embraced its remote majesty.

Today, it is frantic city of 1.3 million souls, all apparently trying to get somewhere on their motor scooters or in their trucks, using a tangled network of crowded roads. Some of the world’s biggest mountains are within sight, but may be obscured by uncomfortably high levels of smog. Consider using a mask to avoid the “Kathmandu cough.” And then start touring the city over the next few days, to discover some of the cultural highlights of Nepal’s capital.
Among its UNESCO-designated historic attractions are Bhaktapur Durbar Square and Patan Durbar Square, both located close to Kathmandu. In Kathmandu itself, historic sites worth exploring include Kathmandu Durbar Square, the Swoyambhunath Stupa (aka the Monkey Temple) and the Boudhanath Stupa.

Some of these are still in a state of repair, reflecting the damage inflicted by the strong earthquake that shook the Kathmandu Valley in April of 2015. The scenes of damage that emerged in the news and online then were enough to discourage tourism for about two years, but visitor arrivals have been on a rebound ever since.

“Yes, after the 2015 earthquake, Nepal tourism saw a big decline, but from 2017 it has been rebounding and 2018 was a great year as Nepal welcomed one million tourists,” said Roka.

He added that “2019 is looking great” with more tourism arrivals on tap. “The government has announced the Visit Nepal 2020 tourism year and is doing the necessary promotions to bring in two million tourists by then,” he said. Nepal’s tourism authorities concur with this outlook by, for instance, reporting a 25% increase in arrivals for January, year over year.

Flights To Everest
Maybe the best reason for scheduling a few days in Kathmandu is booking a Mt. Everest fly-by flight with one of the local small airlines (ie. Buddha Air) that operate from the international airport. These start taking off early in the morning, with the first flights departing at around 6 a.m. and then every 15 minutes or so until about 8 a.m. This provides the best chance for clear, cloudless conditions. Air fares are about US$200.

The payoff for the early start is a spectacular air tour of the mountains that are situated just to the north of Kathmandu. Kathmandu lies just south of the Langtang range and the hour-long flight proceeds eastward from there, running roughly parallel to the Himalayas.

During the flight, passengers will see 20 of the highest mountains in Nepal, starting from the Langtang Lirung peak at 7,2278 metres, then eastwards past Mt. Everest at 8,848 metres, and finally Chamlang peak (7,319 metres).

From there, the plane makes a U-turn and the passengers get a second look at the view while they make their way back west to Kathmandu. Most eyes are focused on Everest, which is increasingly known as Sagarmatha – Sanskrit for “Peak of Heaven.”
www.buddhaair.com

Onward To Pokhara
With visions of Himalayan peaks now firmly implanted, visitors will spend the best part of a day travelling the two-lane road that connects Kathmandu to Pokhara (pop. 350,000). This is the only road connecting the capital to the second largest city in this small country, so it is busy with trucks, commuters, tourist coaches and more. With traffic jams and delays always looming, the quick flight (40 minutes) between the two is definitely worth considering as an item in your travel budget (about US$120).

But that would mean missing a visit to Bandipur, a small town located high in the foothills, about two-thirds of the way on the Kathmandu-Pokhara Hwy. from Kathmandu proceeding east to west. Bandipur was once a key trading hub between India and Nepal, but is now becoming a favourite of tourists, who come for the tranquil rice terraced scenery and hiking trails surrounding it. A number of small hotels have been built to accommodate this growing popularity.

With its lower population, Pokhara feels much less congested that Kathmandu. It has an idyllic setting along the shores of Phewa Lake and its immediate back yard is defined by the dramatic peaks of the Annapurna range of the Himalayas. The city has become an outdoor adventure centre, drawing travellers from around the world who come experience its alpine setting, its lakeside beach bars and restaurants, its mountain trekking opportunities and soft adventure activities.

These can get started early in the morning, before the sun rises, with a quick drive and short hike up to the Sarangkot hill top viewing platform. First light in the east colours the sky various shades of red until the sun’s rays start to illuminate the mountains of the Annapurna range. The most striking of these is Fishtail, (Machapuchare in Nepalese) which gets the lion’s share of attention for its distinctive steeply angled peak dominating the skyline above Pokhara. This is a thoroughly worthwhile excursion.

The same can said for the longer, steeper hike up to the World Peace Pagoda, which is located across Phewa Lake from Pokhara. Hikers first hire a boat (maximum capacity of four people) for the 20-minute rowing trip across the lake, and then start the climb up the stepped trail to the pagoda. The hike is a bit steep and sweaty, but is accomplished in under an hour. Your reward is a sweeping view of the lake, the city and the Annapurna range.

This workout should be enough to encourage an even longer hike up into the Annapurna foothills. The trek from the trail head at Khande up to Australia Camp at 2,100 metres and back down to the trail exit below the scenic village of Dhampus will take a full day, including a stop for a very welcome lunch. Though still well below any signs of snow, the Australia Camp trek still delivers expansive views of rice terraces, villages and the mighty mountains looming above. It is enough to inspire plans for another visit to Nepal, with more ambitious trekking goals in mind.
www.matnepal.com

People who like motorcycles might think that Nepal would be a good destination for riding – and they would be right. They can find everything they need for a motorcycle adventure in Nepal at Hearts and Tears Motorcycle Club in Pokhara.

Hearts and Tears is happy to accommodate clients with a selection of bikes that are oriented toward off, road and trail riding, ranging in size from 250cc to 400cc. Customers join group tours that head out of Pokhara on set road tours of varying length and difficulty. These range from a one-day shakedown blitz of local roads and trails in the hills surrounding Pokhara, to long and challenging multi-day rides on some of the toughest off-road terrain to be found anywhere. Stunning scenery and lifelong memories come as part of the package.
www.heartsandtears.com

One of the top hotels in Pokhara is the Hotel Da Yatra Courtyard, located near to Lakeside Road, where tourists stroll to visit restaurants, bars and a large variety of retail outlets.

The hotel is just steps from the road, but far enough away to escape the traffic noise. It has 46 clean, comfortable rooms, as well as a restaurant the serves breakfasts and dinners.

The Hotel Da Yatra Courtyard was booked through Bestway Tours of Burnaby, BC.
www.bestway.com 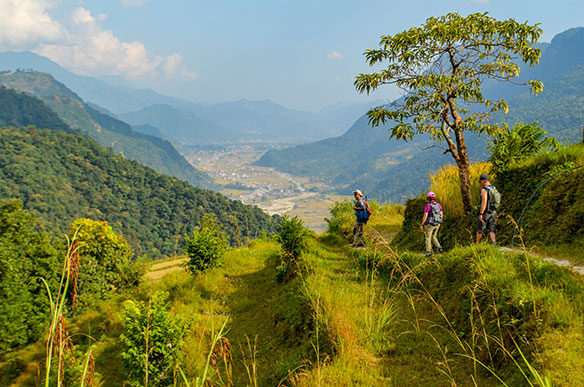