Vienna invites tourists to step on to dance floors 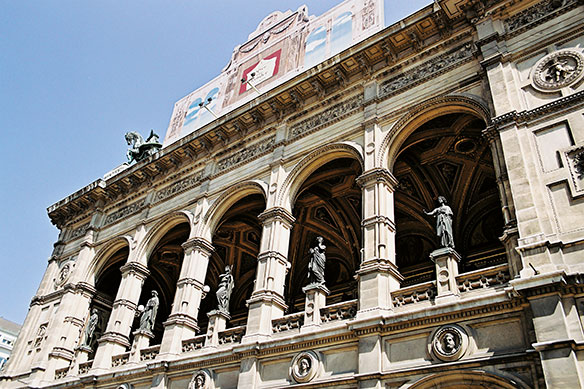 (Photo above: The Vienna State Opera building is just one of many musical venues that await those vacationing in Vienna.)
photo courtesy the Austrian National Tourism Office

Austrian tourism officials say it’s easy for tourists to have a ball in Vienna.
And that’s particularly true for those visiting at the beginning of each year at the height of the season when the Viennese like to dress in an elegant manner and take to dance floors.
A city that is often synonymous with classical music sees hundreds of balls at this time, and tourists wanting to take to a dance floor with locals needn’t be particularly skilled in classic dance routines to do so.
Arnulf Gressel, Austria’s vice-consul in Toronto, noted during the Austrian Tourism Showcase in Toronto that visitors can sign up for a dance lesson that also features dinner, suitable attire and a horse-drawn carriage ride to a grand ball, with the event providing a “fairytale night” for participants.
Gressel also said the Austrian capital keeps adding four- and five-star hotel beds.
Tourists can “spend days and weeks in Vienna, with every day [offering] something new,” he added.
Vienna’s spa scene can include a “luxury chocolate treatment,” Gressel continued.
Gressel also reported that visitors can stay in a suite in the city’s famed Schonbrunn Palace, with a stay there enabling those visitors “to live like an emperor.”
David Szelenyi of the Schloss Leopoldskron hotel in Salzburg, in turn, told the gathering that Salzburg’s old quarter “is almost like a museum.”
A Salzburg summer music festival results in the city being a “cultural metropolis,” he added.
Szelenyi said some scenes from the movie The Sound of Music were filmed in his hotel’s garden, and Mozart is believed to have played piano in the property.
Arlberg representative Wilma Himmelfreundpointner labelled her part of Austria the “cradle of alpine skiing… We didn’t invent skiing, but many think skiing started there.”
Arlberg has over 300 kms of ski slopes and summer visitors will find plenty of skiing and cycling opportunities, she added.
Meanwhile, Sherif Sedhom of Austrian Airlines told the gathering that his carrier provides a non-stop link between Toronto and Vienna and will be introducing its Premium Economy service on long-haul routes in March.
He said Austrian Airlines staff are trained “how to be charming with our passengers,” and noted that Skytrax, which monitors airline performances, has declared that his carrier provides the best airline service in Europe for the past four years.