Home › Digital Post › Welcome to The Bahamas, thank you for not cancelling

Welcome to The Bahamas, thank you for not cancelling 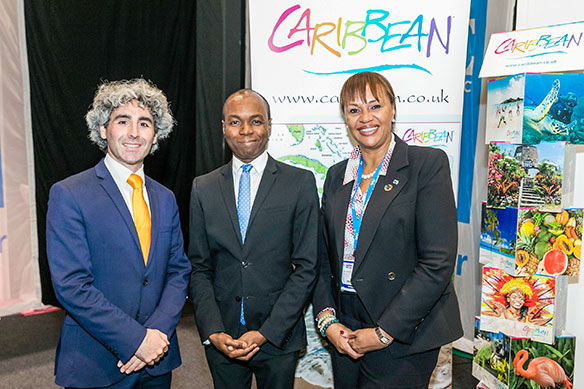 The Caribbean Tourism Organization (CTO) talked tourism at this year’s World Travel Market in London. Seen here, from l to r., are Olivier Ponti of ForwardKeys; the CTO’s Dominic Fedee; and the Bahamas’ Joy Jibrilu.

A mere two months after hurricane Dorian devastated Grand Bahama Island and the Abacos, causing dire collateral damage to the nation’s number-one industry, tourism to the Bahamas was at 80% of pre-storm numbers.

“For us that was quite incredible,” exclaimed Olivier Ponti, VP Insights at travel analytics company ForwardKeys, who pointed out that it took Puerto Rico 15 months to get to 70% of pre-hurricane Maria numbers, while it took a full 20 months to achieve the same percentage after Irma hit St. Maarten.

Ponti told a recent World Travel Market press briefing that, prior to Dorian, Bahamas arrivals were cruising ahead at 5.2% due mainly to strong numbers from Canada and the US.

“That switched to negative numbers because the impact on bookings and cancellations was immediate and serious from both markets, but ForwardKeys estimates that the Bahamas will recover completely much quicker than other hurricane affected destinations,” he said.

Joy Jibrilu, director general of The Bahamas ministry of tourism and aviation told reporters, “We spent only one week in disaster mode then went into marketing overdrive. All our marketing people were on the road talking to airlines, tour operators and travel agents and the collective government and industry strategy worked well.”

According to Jibrilu, the support from the rest of the world has been “unprecedented,” but she lamented that tourism, which accounts for half of Bahamian GDP, was also hit by a lack of knowledge concerning the geography of the island nation.

“The two Abacos islands are as close to Florida as Nassau, and Nassau and Paradise Island, which account for 80% of our product, were unaffected, but bookings plummeted anyway,” she stated.

And she added, “We were also adversely affected by another new phenomenon: People were cancelling because they felt guilty about travelling to the Bahamas even though they knew their destinations were unaffected.”

Jibrilu recounted that, immediately post-Dorian, Bahamas prime minister Hubert Minnis was on a Delta flight from New York to Nassau when he got on the aircraft’s PA system to make an announcement thanking his fellow passengers for not cancelling.

His fellow passengers gave him a standing ovation, she reported.