Welcome to the Travel Universe 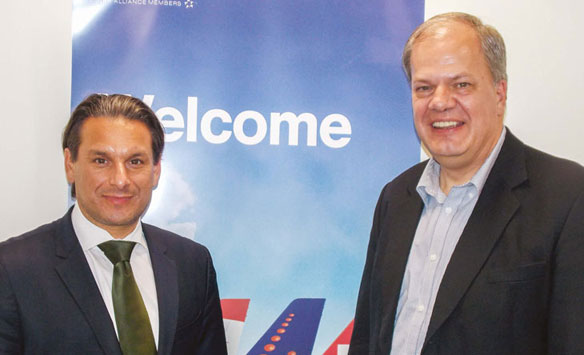 Since he took over as vice-president of sales, The Americas for the Lufthansa Group in January of this year, Tamur Goudarzi-Pour (pictured above left, with Lufthansa Group Canada’s Hans DeHaan) has been living in rather interesting times, having had to deal with the Trump Administration’s travel bans and its new rules for bringing electronics on board aircraft .
But it doesn’t seem to bother him, in fact, he’s rather philosophical about it, telling Canadian Travel Press in a recent interview that for airlines, not just in North America, but around the world, these kinds of things have pretty much become part of the daily routine for those in the airline business.
Goudarzi-Pour said that he’s actually “quite optimistic” about 2017, pointing out that: “We had a good first quarter. It’s the first time since 2008 that we had a profitable first quarter – which is traditionally a weak quarter for us. And the trend is actually getting better and our CEO recently said that he’s actually getting more optimistic by the week.”
Canada has turned in good figures and good growth for the first five months of 2017 and the Joint Venture (JV) is going well, he noted.

Network is key
One of the points that Goudarzi-Pour likes to make is that the Lufthansa Group’s global network is one of its key differences from its competitors, telling CTP that: “Being a global player for us is intrinsically linked to our network and we serve here in Canada 59 weekly frequencies and this connects in the hubs – Frankfurt, Munich, Vienna, Zurich, Brussels (well Brussels is technically speaking not necessarily a hub, but it’s a connector) – and we’re connecting there globally.”
He also explained that while Europe is the airline’s home market, the Lufthansa Group has a lot of VFR business to destinations like Iran, India, Israel, Eastern Europe, Russia, etc. and “where we find substantial, sizeable ethnic communities – like here in Canada – we connect them [to these destinations] and I think that’s where we’re also strong.” 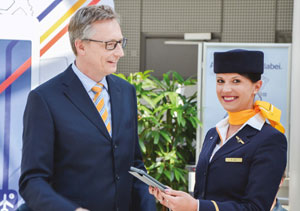 Premium approach
The group’s strength is also found in the fact that whether its serving business, VFR or leisure travellers, it’s taking a premium approach to its customers.
Said Goudarzi-Pour: “That’s the key – the differentiator for us is the premium approach. The network is premium – so [having two very strong partners like] Air Canada and United, the network is even bigger domestically on the other side. We can really link a smaller place in Canada with any point in the world within one stop basically, maximum two stops. I think that is a key point.”
And with a premium approach comes premium products and services, with Goudarzi- Pour pointing out that : “We’ve equipped all of our aircraft with the latest products in economy. Premium Economy is new since October of last year (2016) on all aircraft [it’s] 10% of all seats. The new Business Class is now on all aircraft . Consistency is very important, so it’s on all aircraft . Sometimes our competitors offer new products, but sometimes [they offer] four or five different ones. We offer one product, per class on all aircraft .”

All about consistency
On the issue of product consistency, he told CTP that: “When you enter a Lufthansa plane you know what you can expect. You can expect a real good product and all of the aircraft [will be] the same –Wi-fion all of the aircraft long haul – it’s fully rolled out. And we’re also starting now to put Wi-Fi on short haul.”
But he also noted that the group is looking at other areas like food & beverage concepts, lounge concepts, investing significantly into its premium products and into an innovation fund that will support new ideas both inside the company and with external partners.
And the Lufthansa Group has certainly been innovative, in fact, it has designated 2017 as the Year of Digitalization.
“We’re really pushing hard to digitalize in front and behind the curtain every aspect of the value chain,” he explained, adding that this is happening on the ground, in the air and virtually, anywhere.
Citing examples, he pointed to the Lufthansa Group’s roll out of 20,000 iPads for its cabin crew; teaming up with Amadeus on its Airport Pay program; introducing electronic smart bags; looking at ChatBots; starting new forms of customer service; artificial intelligence; doing new retail – Amazon-style retailing; plus a host of other initiatives.

Defining digital
As for a definition of digitalization – or at least the Group’s definition of digitalization – Goudarzi-Pour said: “For us, it’s a broad definition. It’s basically wherever you can digitalize. Wherever you have paper, you can digitalize. Wherever you have customer data, you can digitalize. Wherever you have certain products that need new platforms – purchasing points – you can digitalize. You can digitalize communications, purchasing – there’s a lot of elements. And for us, it’s really everything, but in the end, it has to benefit the customers.”
Continuing that line of thought, Goudarzi- Pour explained: “We want to create an experience. It starts with the joy of having an easy-to-use Wi-Fi, but in the end, you could be on a plane where the purser surprises you with a birthday cake – that’s something that surpasses that regular service moment and also surpasses expectations. I think for us it is very important that we are on the forefront of that – creating real experiences.”
But there’s still lots to come from the Lufthansa Group in this area, with Goudarzi- Pour pointing out: “We’re still in the beginning of it, not everything is there yet, but I think the next 24 to 36 months will show already a lot of these things coming into the market, but much more is going to come.”

Elephant in the room
An obvious question – the elephant in the room, perhaps – to ask the Lufthansa Group’s vice-president, sales, the Americas is about its GDS fees.
“We introduced [the fees] in September of 2015 so it’s been awhile. I think while there is, of course, criticism [of it], [but] I think it has been accepted by the market,” Goudarzi-Pour said.
“For us, it is a means of differentiating the channels according to the price they have and moreover, to the value they give,” he told CTP.
Goudarzi-Pour pointed out: “The fee itself is one thing, but the other thing is that we need to, and we have this now, direct connect. We have the first direct connect in Americas and more are following. So we’re connecting other agencies, consolidators, tour operators, whoever, with a direct connect.”
As for what he’s telling agents, he said: “The starting point is we always say we go omni-channel. That means that we will not just look at one channel of distribution. We will [look] at all options that we have. So we have, and this is still the majority, the traditional GDS contracts and agents and we have certain incentive structures out in the market. We’re doing the direct connects. We’re doing online, our own online channel, as well. We’re having new, open APIs, so for example, you can book in the US via Kayak or via Google without entering the Lufthansa page. You can directly book Lufthansa. So we have all forms of distribution.”
And he continued: “What’s important is that we offer value [in each of] those and we price them according to the costs that they are creating. And I think that differentiation is just starting and the discussion we’re having with the agents is do you want to jump on board on the direct connect or do you want to do the traditional channel – it’s up to you.”

Differentiated content
Yet just as important, according to Goudarzi-Pour is: “We also like to differentiate the content. So we are increasing our differentiation of content according to the channel and that is something that is attractive, I think, more and more attractive, the more content differentiation you have the more attractive alternative channels will be. I think that’s also an important factor and in the end that’s also an important factor for the customer – that he gets the service.”
Expanding on this point, he said that companies like SeatGuru and others “are there because the customer cannot currently see his seat on the traditional GDS,” before continuing: “I’m sure the GDS will also react and they will definitely develop further, but we have here a competition of the best distribution channel at the best cost and I think that is something that is only healthy for this industry and we’ll see then which agents will choose what form of distribution with us – we offer them everything at certain cost, at certain price, at certain incentive.”
But Goudarzi-Pour also told CTP that “not everything is online,” and observed “we have lots of people who buy in a traditional way, like the Visiting Friends and Relatives segment. They have their traditional, small travel agents oft en where they go and who they trust – and that’s fine, … but there are new players coming.” 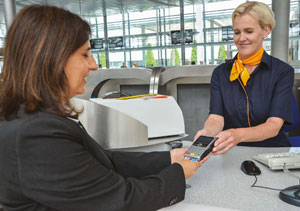 A diverse universe
As for where agents fit in the plan, Goudarzi-Pour said: “They’re a very important partner for us,” before he continued: “But there are various forms of travel agents. I mean we really have a differentiated world of it now. There are the big ones, the TMCs, you have the regional chains, you have the local chains, you have the big consortia, you have the ethnic ones, you have the classic Mom & Pop shop. We have new players coming in. We have the OTAs.”
He told CTP: “So this [is a] very diverse universe of travel agencies, [and] for us it’s important how we can link with them even closer. How we can engage them. How we bring or communicate our information to them so they can inform the customer – and that’s a key, key relationship for us. And it will not go away.”
And he added: “I think actually, the more the need for differentiated products, the more you need human interaction to sell it actually, to explain it. The more important it will be also to have somebody who can do that.”
But in the end, Goudarzi-Pour told CTP: “what’s interesting about our profession is it touches so many things, but the most important is human behaviour – that’s actually the core of our business.”
“People like to travel or have to travel and for us,” he continued, “it’s [about] making [it] more than just [being] from A to B – to give them an experience.”
In fact, the Lufthansa Group calls this the Travel Universe, he said, and that universe extends from “inspiration to thinking about the next journey” and the question is “what is the value chain of that journey.”
“For us,” Goudarzi-Pour said, “it’s very important that we manage the whole value chain of that journey in the Travel Universe. It’s not just operational flying. We don’t want to be just an Uber driver, so we need to control certain elements.
“So now we are looking at how we can give value for money – or even better value for money – and, in the process – create an experience. I think that’s really key.”