Wildfires hurting tourism in the West 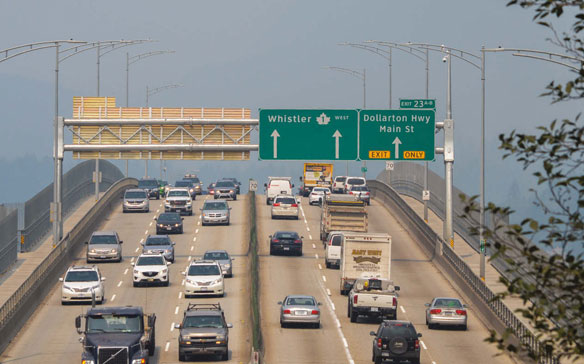 It’s been called the second worst fire season for BC on record, and tourism operators are amongst the many being impacted by wildfi res in the province. The wildfire season got off to an early start in 2017, with many blazes well underway throughout July. A long stretch of unusually hot and dry weather into August has yielded no rain, and there are now enough fires, combined with winds, to generate a smoke haze in Vancouver.
As of early August, some 5,000 sq. km. of forest, bush and grassland had been burned, making 2017 the second worst in B.C. recorded history in terms of land scorched, says the B.C. Wildfire Service.
BC’s most destructive fire season on record was in 1958, when about 8,560 sq. km. were burned. But August is usually the most active month for wildfires, so the service cautions that there is likely more to come. There were 126 fires burning across BC by the end of the first week of August.
And those fires have had a big impact on many tourism-based businesses, including resorts, hotels, guest ranches, camping grounds, tour companies and more.

A good example
The Eagle’s Nest Resort in BC on Anahim Lake in the Chilcotin region of the province is a good example.
“Other than one tour group that made it through on Aug. 4, virtually all other reservations on our books were canceled since the start of the fires July 8,” said Tim Noble, a manager at the resort.
“In addition, we typically get a lot of business that is booked one or two weeks in advance as well as lots of drop-in business. This year that is virtually zero. At this point, we have currently had most reservations canceled through mid-August and are experiencing cancellations into September.”
Noble had mixed feelings on how the fires will impact future guest business for the resort. “There have been no bookings since the fires started, and the impact will be felt for next year and perhaps beyond. Having said that, most people who canceled said they would consider re-booking next summer, so we’ll see.”
But the present day situation is the more immediate concern. “In the Chilcotin region, all operators are hurting,” said Noble. “All the highway closures have kept people away, even in areas where there were no fires.”
Petrus Rykes, the former owner of the Eagle’s Nest Resort, and now a manager there, noted that the revenue losses are considerable. “It was $10,000 in canceled reservations in the first week, and it has multiplied many times since then.”
Rykes has been an active advocate for the Chilcotin region tourism industry in terms of solving crucial issues, and believes there are ways that the provincial forestry policies can be modified to help mitigate the spread of fires.

Another perspective
Joseph Dubois of the Dubois Hospitality Group (DHG) in BC specializes in making resort and hotel bookings for international inbound tour operators who handle groups. Their timeline on bookings is long, with most reservations already confirmed for 2018. The impact of the wildfires on this Western business is therefore not nearly as apparent.
“The fires have not dampened demand that I can see,” said Dubois. “My Banff hotel group properties are as busy as reservations determined in advance and group cancellations are less than a typical year.”
DHG hotel partners include Banff Avenue Resorts, Rundlestone Lodge, High Country Inn, Irwin’s Mountain Inn and Red Carpet Inn.
“We’ve been confirming groups in Banff for summer 2018 since November 2016 and we are already seeing sold out dates – and we are declining group requests. I don’t see the fires having any effect on business for summer 2018.”

Good deeds
Dubois personifies the helpful attitude that tourism industry stakeholders have taken in terms of lending a hand during tough times. He helped organize a lastminute motorcycle rally with a few hundred Harley-riding partners, and end up raising about $10,000 for the Red Cross.
The Tourism Industry Association of BC is aware of efforts like these and has been paying tribute to those who are making contributions.
For instance, a story on the TIABC website says that when 108 Mile Ranch and 105 Mile House were first evacuated, Fircrest RV Resort on nearby Lac La Hache offered people with trailers or RVs a free place to stay close to home, but out of harm’s way.
During the first days of the fire, “People had nowhere to go. We were here, and we felt safe, so we told them to stick around in the meantime,” said the managers. “We kept each other company and sat back and waited.”
The Eagle’s Nest Resort is one of those that is housing firefighters, including pilots and air crew.
“Some operators, such as ourselves, have been lucky enough to host fire crews and therefore earn some revenue, but many – including all operators that provide tours – are not so fortunate,” said Tim Noble. Walt Judas, the CEO of TIABC, offered encouragement “to the many people in our industry that have been working behind the scenes virtually round the clock to do what’s best for those affected, and for our industry in general.”
He also advised tourists to not abandon their intentions to visit BC, but to consider rebooking next year if they are forced to cancel their reservations this year.
“We realize that some travellers planned to visit areas in the impacted zones, and we understand the disappointment,” said Amy Thacker, CEO for Cariboo Chilcotin Coast Tourism Association. “We invite them back to visit those areas this fall or next year, because many are truly bucket-list destinations. The tourism businesses will continue to need support, and to see future bookings coming in would be a great start.”