Home › Pix of the Trade › It’s A Party With Riu

It’s A Party With Riu 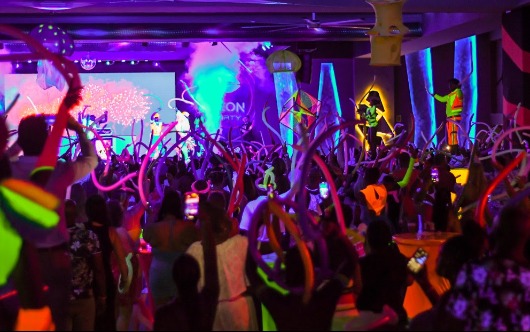 The recently refurbished Riu Montego Bay has now added Riu Party events to its All-Inclusive 24h by RIU entertainment program. Every Friday, hotel guests from the Riu Montego Bay, as well as customers staying at the Riu Reggae and Riu Palace Jamaica, can enjoy the Riu Get Together Party with either a white or neon theme on alternating weeks.

The first party took place July 15 in the theatre square and brought together almost 2,500 people, who enjoyed a night full of colour.

The spectacular set design delighted guests, with fluorescent lights, music, dancers, performances, and explosive moments with special effects and choreographies that make party-goers throw their hands in the air. Fun nights in a great atmosphere, all included in the service at RIU’s hotels in Montego Bay.

The Riu Montego Bay, which has more than 800 rooms, was refurbished in December 2020. The result was a more modern hotel with extra services that could be enjoyed by guests at the three hotels in this destination, such as the Riu Get Together Party or Splash Water World.

The Riu Party is held in other destinations. The first Riu Pool Party took place in 2018 in Los Cabos, Mexico, and these events are also held in Punta Cana, Dominican Republic.

What’s more, Riu Get Together Party events are held at the Riu Guanacaste in Costa Rica, the Riu Tequila and Riu Jalisco in Mexico, and the Riu Republica in the Dominican Republic.