Home › Pix of the Trade › Marilyn Is Back At The Lexington

Marilyn Is Back At The Lexington 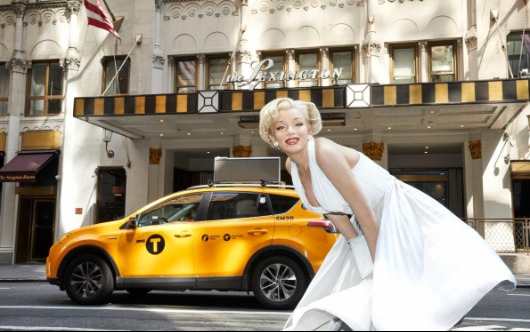 Marilyn is back at New York City’s Lexington Hotel … that’s Marilyn Monroe, in case you were wondering.

Suite 1806 at The Lexington Hotel, Autograph Collection, was the marital home of Marilyn Monroe and New York Yankees Hall of Famer Joe DiMaggio while the actress filmed The Seven Year Itch in the summer of 1954.

Now, the Madame Tussauds New York wax figures of the pair return to the scene of their final argument — with Monroe recreating her subway grate scene, blowing dress and all.

From Aug. 4 through Aug. 17, guests can interact with the Monroe and DiMaggio figures 24 hours a day in the lobby. Of course, the two will be kept peacefully apart on separate sides of the modern Art Deco-inspired space.

The wax figures are on loan from Madame Tussauds New York where no ropes or barriers hold guests back from meeting their favorite celebrities. Created at Madame Tussauds’ London studio, each figure was brought to life by a team of sculptors, colorists, hairdressers and stylists.

To achieve an exact likeness of Monroe and DiMaggio, the team of artists researched hundreds of archival photographs to meticulously capture their most striking nuances, with each figure taking six months to complete.

Guests can also book suite 1806 — now the Norma Jeane Suite — at The Lexington Hotel. Inspired by the couple — who eventually reconciled and were friends until her 1962 death — the 600-square-foot Hollywood glam suite with private balcony is outfitted with luxe velvet and silk furnishings, monogrammed Dorothy Draper cocktail glasses and a stunning vanity. The separate bedroom has a king bed — just as it did back in 1954.

Go to www.lexingtonhotelnyc.com for more.