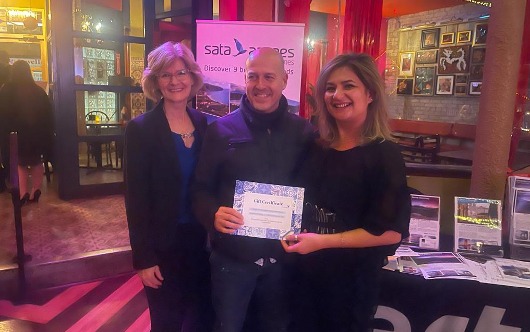 The Global Tourism Film Festival (GTFF) kick-started the next GTFF Festival edition with an immersive evening of Portuguese culture featuring entertainment and cinema in Toronto Dec. 12.

Celebrate Portugal; a first of a kind Portuguese gastronomy, music and cinematic experience presented in association with the non-profit Lula Music and Arts Centre supported by Hertz Portugal and SATA Azores Airlines, drew in a higher than anticipated turnout in Toronto’s Little Portugal.

Master of ceremonies was TV and radio host Rick Campanelli.

Revelers attending the intimate evening also had the opportunity to discover visiting Portugal via a booth facilitating travel information. Concluding the night was a draw for a seven-night Azores holiday package for two with flights by SATA Azores Airlines and accommodation at the Zenite Boutique Hotel & Spa in Terceira, won by Dana Said.

Terceira, one of the vibrant islands of the archipelago, is home to the Azores’ only UNESCO World Heritage City, Angra do Heroísmo.

Karen Evans. director for Canada of SATA Azores Airlines, gifted the prize to the winner.

The Global Tourism Film Festival will be held in partnership with the City of North Bay, Ont., April 27 to April 30, 2023.