Home › Destinations › That’s Quite A Collection

That’s Quite A Collection 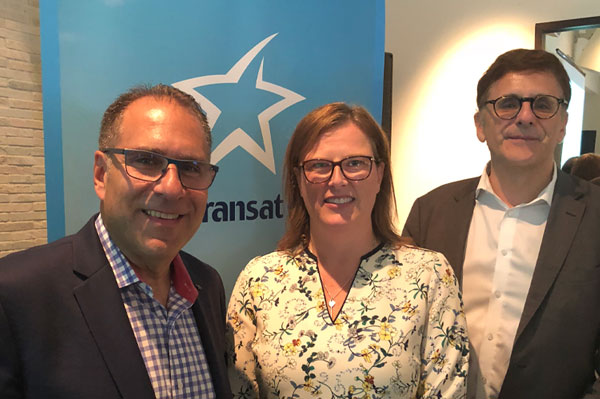 The operator rolled out its winter 2018-2019 Sun program in Toronto yesterday, adding Portugal and Spain to its 34 destinations in Mexico, South America, Central America, Florida and the Caribbean and packaging it all up in a single brochure.

Joe Adamo, president of Transat Distribution Canada and vice-president and chief distribution officer, Transat, spoke to a VIP crowd of the company’s key travel trade partners, noting that there’s a lot on the go at the company these days.

The company’s fleet renewal is underway, with Transat having 10 new A321 neo aircraft on order as it transitions to an all Airbus fleet. And of note, is the fact that Transat will be the first North American carrier to fly the new plane with delivery set for the spring 2019.

Air Transat is expanding its domestic feeder program to Toronto and Montreal to feed its transatlantic service from Vancouver, Edmonton and Calgary; increasing capacity by 187%.

Nicole Bursey, commercial director, Transat Tours Canada, offered an overview of what Transat had to offer in the sun in the winter of 2018-2019 that ranged from everything from its winter programs to Europe; Early Booking Bonus; resumption of flights to San Juan and St. Maarten from Toronto; increased capacity to a number of destinations, including Costa Rica and Florida; its four hotel collections – Luxury, Distinction, Solo and Family; and a whole lot more.

Bursey noted as well that Transat’s Cruise brochure, which will be available soon, will feature 46 cruise packages, 16 ships and departures from 7 ports of embarkation including two new ports – San Juan, Puerto Rico and Cartagena, Columbia – and Princess Cruises will be its newest cruise partner.

So stay tuned, there’s lots more to come from Transat.