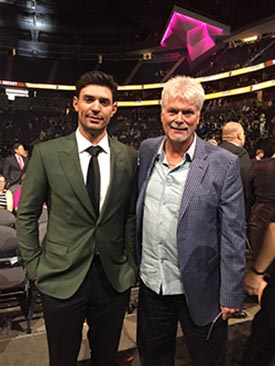 Canada wraps up successful Invictus Games
Torch passed to Australia as Sydney gets set to host 2018 Games
It will be a hard act to follow, but Australia is ready for the challenge as Canada wrapped up a hugely successful Invictus Games Saturday night (Sept. 30), passing the torch to the land Down Under, as Sydney gets set to host the Games next October… Read >>

ACV brings star power to Toronto sun launch
Gala event attracts close to 1,000 agents
It was a night to remember as Air Canada Vacations (ACV) brought a little star power – in the form of singer Shawn Desman – to the official launch of its 2017/18 Sun Collection in Toronto last week… Read >>

Falling for Colorado
Whiskey, cowboy poetry and beer
It’s a special time of year in Colorado, and those lucky enough to visit during the fall can experience numerous unique getaways and experiences, not to mention a chance to take in one of the hundreds of festivals or special events… Read >>

Las Vegas ready to drop the puck
Just for the sport of it…
While skeptics may think the National Hockey League is taking a bit of a gamble by bringing a team to Las Vegas – the Vegas Golden Knights are set to take to the ice next season – many others, including more than 14,000 season ticket holders, would disagree… Read >>

The Australis Experience
Patagonia-specialist adding second purpose-built ship
Small-ship adventure cruise line Australis has good news for agents with wanderlust clients interested in sailing to the “end of the world” – it is launching a second ship next year, Ventus Australis, sister ship to Stella Australis … Read >>

Life’s a splash at Universal’s new Volcano Bay
Families looking to get wet and wild can once again do so at Universal Orlando Resort with the May 25 opening of its newest theme park – Volcano Bay.
The impressive 25-acre water park replaces Universal’s former Wet ‘n Wild water park and features more than 18 attractions… Read >>

Friendly Puerto Vallarta
Get a taste of the real Mexico
Living up to the moniker of being the world’s friendliest city – as named by Condé Nast magazine – may be a challenge, but one Mexico’s Puerto Vallarta is taking in stride and living up to as shown by the number of travellers flocking to the sun destination each year… Read >>

Out and about in Las Vegas
‘Entertainment Capital’ continually reinventing itself
Not when it comes to sharing what the “Entertainment Capital of the World” has to offer. Sin City has come a long way from simply being a place to try your luck in the casinos or partake in a $5 all-you-can-eat buffet. Entertainment options range from world-class shows to high-end foodie tours to zip-lining down Fremont Street… Read >>