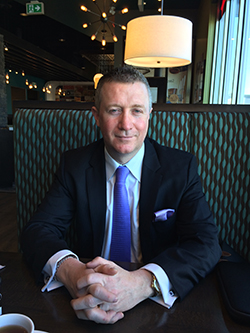 Eric, a third generation hotelier, is a 26 year veteran in the hotel industry, and is a frequent speaker at industry events, including the Hotel Electronic Distribution Network Association (HEDNA), United States Tour Operators Association (USTOA), & Online Revealed.
Prior to joining Realstar, Eric worked in Europe for Renaissance Hotels, Steigenberger Hotels and Vienna International. Eric can work in English, French & German and speaks conversational Czech and Dutch.
In his spare time Eric is active in his community coaching box lacrosse, baseball and futsal.
He recently participated in a medical volunteer mission in Haiti.

What agents need to know about hotel fees and surcharges
Over the last few years, there has been a growing trend right across many segments of the travel industry – including airline, hotel and rental cars – of additional fees being charged that are not included with the original price of the airline seat, hotel room or rental car… Read >>

Tariffs, Brexit and the ‘great unknown’
The Hotel Insider
The last few years have been so strong for travel that it would seem that we might be able to ride this wave for another year, and we will all be able to grow our occupancy and continue to push rates, as has been our custom since the last recession 10 years ago. But will 2019 be another bullish year for the travel industry?.. Read >>

Sustainability of mass tourism: A hotelier’s perspective
Global tourism has been enjoying buoyant times, as the world came out of the last recession during the sub-prime lending crisis. There have been significant variables that have facilitated this that reach right across all segments of the tourism industry, and factors that are not tourism related that have benefited us… Read >>

Level the playing field in the sharing economy
New business disruptors such as Airbnb and Uber have been making headlines globally for a variety of reasons. The headlines are both positive and negative but they are most certainly prospering, and the sharing economy will be part of the business landscape for a long time to come… Read >>

Hotel loyalty programs – are you truly connected?
It is no secret that travel agencies have endured a torrid last 15 years in our industry, whether it was the meteoric rise of the Online Travel Agency (OTA) or the constant reduction of revenue sources such as commissions from segments of the business, agencies have had to continually reinvent themselves to stay relevant to their customers… Read >>

The Hotel Insider
The highs and the non-existent lows of Canadian hotel pricing
2017 is an exciting year for Canada, celebrating its 150th anniversary, and it appears that this is going to be a record-breaking year for travel in Canada. In addition to our 150th celebrations, there are many other factors making inbound tourism buoyant such as the weak Canadian dollar versus the US dollar and Euro; extensive additional airlift from international markets, in particular China; the possible negative perception of travel to our American neighbours south of the border; and of course excellent tourism product branding from Destination Canada… Read >>

Odessa, Ukraine: A post-Soviet paradise
An off-the-beaten track experience awaits for many travellers in the city of Odessa – a destination well known for Russian tourists in the summer, but presenting intriguing possibilities for Western travellers as well… Read >>