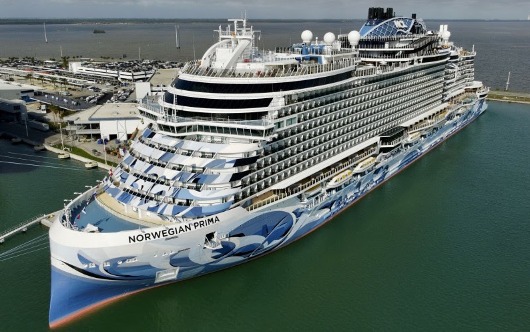 Norwegian Cruise Line’s (NCL) new ship begins its first full season of voyages from its homeport of Port Canaveral after making history as the first major cruise ship to be christened in Reykjavik, Iceland which was follow by an inaugural tour with voyages from New York; Galveston, Texas; and Miami, before arriving on Florida’s Space Coast.

Over the weekend (Dec. 11) the Norwegian Prima embarked on its first cruise from Port Canaveral, offering  round-trip Caribbean voyages through March of 2023, with calls to the tropical ports of Mexico, Jamaica, Honduras, and including visits to NCL’s exclusive resort-style destinations – Harvest Caye in Belize and Great Stirrup Cay, the Company’s 270-acre private island in the Bahamas.

Harry Sommer, president and chief executive officer of Norwegian Cruise Line, said: “We are thrilled to bring our newest ship, Norwegian Prima, to Port Canaveral with the opportunity to introduce her to the tens of millions of travelers that visit the Orlando area every year. The city offers the ultimate family vacation destination, given its accessibility to attractions, the cruise port and easy airlift from almost anywhere in the world. There is fun for everyone, making it one of the best pre-and-post cruise cities.”

This year, Port Canaveral will welcome more NCL ships than ever before including Norwegian Escape, Norwegian Getaway, Norwegian Joy, Norwegian Gem and Norwegian Prima, the newest ship of any cruise line to visit the port.

Go to www.ncl.com for more.