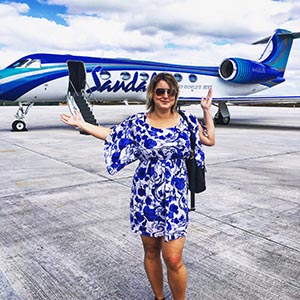 Sailing Away With The Moorings
“There are two sides to the British Virgin Islands,” our captain Martin Street says after we’ve settled aboard The Moorings 5800 Legacy Edition catamaran at sunset, explaining that the archipelago is known on one hand for its idyllic scenery, secluded coves and snorkelling spots, and on the other a beach-side party scene. “What do you want to see?”… Read >>


A casual escape
Relaxation and adventure await at Panama Jack Resorts
It all started with sunscreen. Since launching in 1974, Panama Jack’s product line has evolved to include sunglasses, clothing, hats, bags, accessories, and more. But today, thanks to a partnership with Playa Hotels & Resorts, the brand has taken part in an even bigger evolution by stepping into the all-inclusive resorts market in Cancun and Playa del Carmen… Read >>

Combatting over tourism
The recent decision to halt tourism for six months on the island of Boracay, which the Head of State of the Philippines dubbed a “cesspool,” has reignited warning bells about the potential pitfalls of over tourism… Read >>

A passion for tourism: Germany puts on a show at GTM 2018
Along with reunification, the CEO of the German National Tourist Board believes the fall of the Berlin Wall in 1989 also played a significant role in helping shape Germany into the thriving tourist hub it is today… Read >>

25 years in the making
Switzerland celebrates banner year from Canada
With an 11.2% increase in arrivals in 2017 and a 9.1% gain in overnights, Pascal Prinz, director Canada for Switzerland Tourism, says the destination noted the best results from the Canadian market in a quarter of a century… Read >>

A record year for Canadians in Spain
Catalonia a top draw
Overall arrivals to the European destination soared to 81.8 million tourists in 2017, including a record 489,307 Canadians – representing a growth of 25.2%. “2017 was a very impressive year for the whole of Spain for the different markets and also for Canada,” Laura Pena Alberdi, director of the Spanish Tourist Office, Embassy of Spain in Canada, tells Travel Courier… Read >>

The ripple effect
They’re movers and shakers. Their contributions have changed and continue to change the nature of travel, both in Canada and around the world. In this week’s issue, Canadian Travel Press’ series of profiles on Women in Travel continues with Adrienne Lee, Director of Development at Planeterra Foundation, G Adventures’ non-profit partner… Read >>

The new kids on the block
The latest on Puerto Vallarta’s thriving hotel and resort scene
Whether your clients are looking for luxury, an all-inclusive escape, a no-frills hotel or something in-between, Puerto Vallarta has a lot of options for leisure and business travellers alike.
Here’s the scoop on some of the latest updates and openings in the popular Mexican tourist destination, which Conde Nast Traveller named one of the Top Cities in the World… Read >>

Where are Canadians heading?
Insights into outbound travel trends
Canadian travellers are proving that age is but a number, as a growing number of citizens are continuing to cross countries off their bucket lists as they grow older.
“A lot of those older cohorts are a lot more mobile than their predecessors, so while historically travel tapers off in the later years, it’s still going strong right now,” .. Read >>

Leveraging Instagram in the travel business
It’s an Instagrammable world
They say a picture is worth a 1,000 words, and with 800 million monthly active users, there’s no denying people are drawn to the imagery of Instagram. Seeking more insights into its users, Susan Rose, director of product marketing at Instagram, says the social media app commissioned a research company to run a study on how people are influenced by content pertaining to their interests and passions… Read >>

Don’t panic, just figure out a solution
They’re movers and shakers. Their contributions have changed and continue to change the nature of travel, both in Canada and around the world. In this week’s issue, Canadian Travel Press’ series of profiles on Women in Travel continues with Christiane Germain, the co-president and co-founder of Group Germain Hotels… Read >>

Scotland has a spirit of its own
Being a filming location for a certain popular TV show has certainly boded well for tourism to Scotland. “We cannot talk about Scotland and not talk about Outlander,” says Keith Campbell, assistant market manager – Americas for Visit Scotland. “It’s huge for Scotland. We’re developing an Outlander filming location map. We’re constantly trying to keep up to the level of demand for itineraries about Outlander.”.. Read >>

Saint Lucia seeks to inspire
Saint Lucia’s tourism minister Dominic Fedee references American rapper Ludacris when describing the unique experiences that await travellers in the Caribbean island. “Saint Lucia is easily the most exciting destination in the Caribbean,” he tells Canadian Travel Press. “There’s nowhere else in the Caribbean where you can interface with a volcano the way you can with our sulphur springs… Read >>

Call it a comeback
Travel to France is blooming
After facing some tumultuous times for tourism – leading to a global decrease in arrivals in 2016, Mélanie Paul-Hus, director for Canada at Atout France, was in Toronto recently to share the good news that travel to France is back in full bloom… Read >>

Canadians discover Ireland is a whole new experience
As tourism to Ireland continues to boom, with the island nation reporting record-breaking results for the seventh straight year, the Canadian market is doing its part to contribute to the growth, joining the ranks as a top 10 feeder market for the destination… Read >>

Feeling the vibe in Jamaica
It’s more than an island in the sun
If the essence of a destination could be captured by an artist, it just may be Jamaica and the reggae, ska and rocksteady sounds of singer-songwriter Bob Marley. Laid-back lyrics like “Don’t worry about a thing, cause every little thing’s gonna be all right,” make for an ideal soundtrack, as vacationers bask in the sun from one of the Caribbean island’s many white-sand beaches, … Read >>